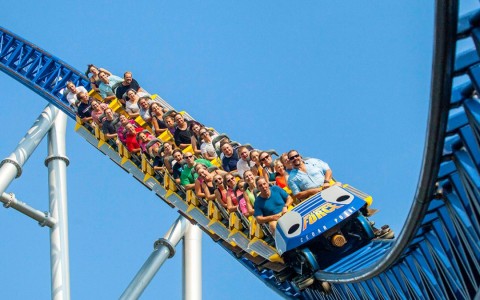 Amusement parks have been known for their constant innovation and expansion. Park executives are always looking for the next big thing to draw in a crowd—relying on annual pass holders and nostalgia isn’t always enough. Roller coasters are a great way to do just that, and while the general public gets to glimpse parts of the production process—such as the building and promoting of new rides—a plethora of decisions and plans are made behind the scenes.

In order to explore the work that happens between the thought of a new roller coaster and opening day, we’ll have to put on our Roller Coaster Tycoon hats, asking ourselves the big questions—and the equally important small ones—that go into park planning. After this, you may even be able to guess what’s coming next at your favorite park.

If you hang around coaster enthusiasts long enough, you’ll start hearing them mentioning gaps in park lineups. What exactly are gaps?

Well, amusement parks are responsible for providing a high level of satisfaction for a wide selection of guests: thrill seekers, families with small children, roller coaster enthusiasts, annual pass holders, tourists, foodies, photographers, to name a few. This is harder than it may seem. Amusement parks, even in their roller coaster lineups, must have variety, from kiddie coasters to record breakers. Sure, some of us would love to go to a park chock-full of intense, heart-stopping, stomach-dropping roller coasters, but would that really be equitable for a major park, only marketing to a specific—mostly adult—crowd? No. Parks must pull in all demographics to survive the competitive landscape.

A park of all intense "grown-up" coasters would have a major gap, the gap in question being family and kiddie coasters. The next time you go to your favorite park, try to pick out the gaps.

As an example, let’s start with Busch Gardens Tampa, a constantly-evolving park that’s just as focused on its animal exhibits and beautiful scenery as it is its roller coasters. With arguably the most expansive lineup in Florida, Busch Gardens Tampa will boast ten roller coasters in total this year, including a kiddie coaster in Air Grover, a shuttle launch coaster in its newest addition, Tigris, a classic sit-down looper, an inverted coaster (aka, where your feet dangle below the track), and plenty more. With Iron Gwazi opening later this year, this will fill in the park’s gap for a hybrid coaster (a relatively newer park need with the emergence of Rocky Mountain Construction's hybrid models). To decide what comes next for this park, executives must examine their lineup and find any areas or demographics they may be missing out on.

So with these ten coasters, where’s the gap?

You could say the park’s missing an intense Gigacoaster (or, a coaster that exceeds 300 feet) like Fury 325 at Carowinds, or maybe a classic wooden coaster like defunct dueling coaster Gwazi. Busch Gardens Tampa doesn’t currently have any indoor coasters, so perhaps that would be an area to consider.

The park already has a world-renowned sit-down looper in Kumba, so it’s safe to say they won’t be building one any time soon. The same goes for launch coasters (Cheetah Hunt and Tigris) and spinning coasters (Cobra’s Curse, which also acts as a great family addition for younger audiences).

Examining gaps doesn’t stop within the park boundaries. One must also look at the surrounding parks, such as parks in the same state or surrounding area, for gaps. To keep with the Busch Gardens example, Busch Gardens Tampa would probably benefit from a Hypercoaster, or a coaster that exceeds 200 feet. However, with Mako at Sea World Orlando just over an hour away, it would be somewhat pointless to build a similar coaster so close by. The same goes for a flying coaster, with Manta easily filling that role. If you think about your state or your area, you will probably find that there’s not a great amount of overlap between your closest parks’ roller coaster lineups. You'll rarely find two of the same type of ride in your state.

Why is this? Once again, it comes down to profit and marketing. In order for, say, Busch Gardens Williamsburg to pull a crowd from King’s Dominion, both parks in Virginia, they must offer something different, something you can’t just get at the park down the street. Variety and individuality is key for a standout amusement park.

In examining the gaps, things are already narrowed down for those who make decisions at major parks. So what comes next?

Limitations are most commonly found in three categories: space, money, and permits.

Space pertains to how much actual space is in the park to build upon. Parks like Cedar Point struggle with this, as it is built on a landlocked peninsula. In order to expand, either something must be removed, or you have to get creative. Getting creative can mean anything from purchasing a roller coaster that can be set on a small plot of land, to weaving a coaster structure in and out of existing rides and buildings. Busch Gardens Tampa recently made good use of space in their newest coaster, Tigris. This is a Sky Rocket II model from Premier Rides, a cloned model (or a model with exact copies found in multiple locations) made to provide a high level of thrills in a small plot of land. On top of being a short track length, the roller coaster is incredibly narrow and therefore able to squeeze into even the smallest of footprints.

Money is, well, money. When parks are deciding on a new roller coaster, they must examine the loss versus the gain. As with any business venture, the new product must be profitable, or make back its money and then some. A relatively slower season (see: 2020) may cause a slimmer wallet for parks, and send them to either cheaper manufacturers or smaller additions. But even if parks are doing poorly, certain parks take a big swing with the plans of a high reward in return, building massive additions with the hopes that the people will come.

Permits are perhaps the most boring and tedious part of the coaster-planning process. Though not every park is restricted by permits and local residents, it’s a bigger problem than you’d think. Restrictions such as noise ordinances or height barriers constantly have to be dealt with in this industry. If a park is too close to an airport, for example, they may not be able to exceed the 200-foot height mark.

This isn’t always a bad thing, though. Take a look at Phantasialand in Germany, a park heavily barred by height restrictions that came up with the creative solution to build lower instead of higher. By starting lower, using the landscape and trenches to build, new crowd-pleasing roller coasters can thrive.