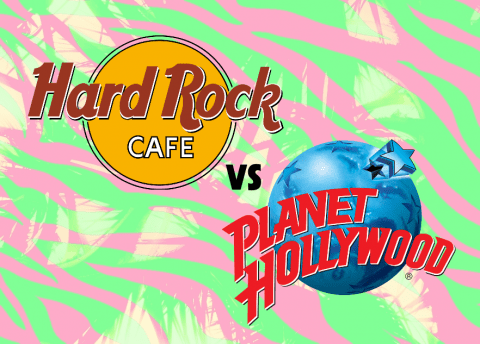 Once upon a time, three Planet Hollywood gift shops thrived on Walt Disney World property, not counting the actual crash-landed planet in the middle of Downtown Disney. It even had an outlet store on International Drive. Earlier this year, the last dedicated gift shop in town, just shy of three-years-old, closed to make way for a chicken finger sauce bar. Down the street, Hard Rock Café renewed its long-time lease to keep their crown-jewel real estate at Universal Orlando through 2039.

There weren’t many survivors of the Great Theme Restaurant Wars. That might seem like a grim assessment, especially talking about a town that still has a House of Blues, a Bubba Gump Shrimp Company, and two Rainforest Cafes on the same bus line, but consider the fallen.

Both the World Wrestling Federation and World Championship Wrestling launched restaurants. Both were shuttered by 2003, despite the promise of dining inside the famous steel cage. Dick Clark tried his hand at the music-based food market with a chain of American Bandstand Grills. The last Bandstand closed in Branson just a few years ago. Steven Spielberg bet big on the hope that tourists wanted to eat inside a submarine. Zagat compared Dive! Deep - See - Experience to “eating inside a pinball machine.” Despite hopes for 60 locations worldwide, only two were built.

For every chain you can still find at the odd mall somewhere in the Midwest, four or five weren’t so lucky, most of which the average joe never noticed come or go. But there are only two chains that soared high enough to cement their names as eternal short-hand for the theme restaurant craze, regardless of how hard they landed afterward.

In 1971, mop-headed Americans Isaac Tigrett and Peter Morton founded the first Hard Rock Café in a an old Rolls Royce dealership in Mayfair, London. They just wanted a place to eat hamburgers that reminded them of home. The first live performance came in 1973, when Paul McCartney & Wings decided to warm up at the Café on a whim. The following year, the restaurant printed its first run of the company’s now-ubiquitous t-shirts, originally intended as uniforms for a local soccer team. But it wouldn’t be until 1979, though, that they created the themed restaurant as we know it, when they started bolting rock and roll artifacts to the walls. Or rather, when Eric Clapton hung his guitar over his favorite barstool and Pete Townshend mailed his own to one-up him.

The London original remained the only Hard Rock Café into the early ‘80s, becoming a hot-spot for young movers-and-shakers like themed-restaurant-connoisseur Steven Spielberg as he wrapped up Raiders of the Lost Ark at nearby Elstree Studios. Expansion was inevitable, but Tigrett the rockstar and Morton the businessman had differing opinions on the direction.

After a laborious legal process, the solution was geographic. Tigrett’s Hard Rock Café International, Inc. could do what it wanted with the brand east of the Mississippi and Morton’s Hard Rock America, Inc. could do what it wanted to the west. In 1982, Morton managed to open their first all-American burger joint in America with Hard Rock Café Los Angeles. The star-power backing of Hollywood royalty and proven Hard Rock fan Steven Spielberg didn’t hurt. But Tigrett wasn’t far behind with Hard Rock Café New York City in 1984, with the support of eventual-theme-restauranteur Dan Aykroyd.

Over the next several years, the former partners duked it out in their respective districts, with unauthorized copycats biting at their international heels. It wasn’t until a stock market plunge in late 1987 that the players changed and Tigrett sold Hard Rock Café International to Robert Earl, an enterprising force in food-service with 70 restaurants to his name at the time.

The spiritual Tigrett made out with about $30 million, moved to India so he could spend it building hospitals, and returned to co-found House of Blues in 1992.

Earl, meanwhile, had half a globe to stamp with the Hard Rock Café logo. It didn’t take him long to look at the biggest tourist market on the east coast that didn’t come with a Statue of Liberty.

Robert Earl approached Disney chairman Michael Eisner about opening a Hard Rock Café on company soil. The earliest plans for Pleasure Island, Eisner’s notorious experiment in nightclub entertainment, were announced in 1986. It wouldn’t open until 1989. There was time for a Hard Rock Café to sneak in somewhere, and what better complement to the up-all-night attitude they were looking for?

Eisner passed. In his book Work in Progress: Risking Failure, Surviving Success, he remembers it as a learning experience, if not exactly a fun one. “’We can do our own rock’n’roll themed restaurant,’ I told our group.”

Not long after, Earl went to the competition. Universal, still building its $650 million experiment up I-4, was only too eager to hear a pitch from a proven brand. They offered Earl a prime spot within the park and outside the bounds. Earl chose both.

It would be more than just the first Hard Rock Café at Universal Studios Florida, with entrances from both the park and the parking lot. As the 13th outpost in the world, Hard Rock Café Orlando was the first ever built from the ground up and the largest by a mile, with four times the seating of the London original. From the pavement, it looked grand enough, but for incoming passengers in the sky above, it was a 300-foot-long guitar, with a footbridge across the highway forming its neck. It wasn’t just a restaurant - it was a mission statement you could read from low orbit. Hard Rock was Universal and Universal was Hard Rock.

The deal paid off to the tune of 5,000 paying customers a day, becoming the chain’s most successful outpost not long after opening on June 7th, 1990.

Good news for Earl. Frustrating news for Morton, who’d already been butting heads with him over licensing. They jointly owned the Hard Rock Licensing Corporation, which determined what would and would not be getting stamped with the already-famous logo. Earl wanted to keep expanding as fast as possible. Morton did not, at least not at Earl’s pace. Even Tigrett chimed in from the sidelines, warning Earl that he was wearing out the brand.

Earl took his advice and made a new one on the side. Bryan Kestner, a 20-something entrepreneur and day-player in The Running Man, originally called his concept “Café Hollyrock.”  Keith Barish, producer of The Running Man and a whole lot more, didn’t like the name, but he liked the idea, enough to contact somebody that knew the theme restaurant business.

Peter Morton disagreed, filing a $1.5 billion lawsuit against Earl and the Rank Organization, which had absorbed Earl’s company just before the Planet Hollywood launch. The style of restaurant was one thing, but since Planet Hollywood wasn’t under the Hard Rock umbrella, Earl could theoretically build them west of the Mississippi. Say, right next door to one of Morton’s Hard Rock Cafes.

Robert Earl wasn’t worried. In December of 1992, he let his contract as the head of Hard Rock International, Inc. lapse. The following year, two new Planet Hollywoods opened and five more were planned. The year after that, a chain of dedicated retail stores, “Planet Hollywood Superstores,” opened just to handle the merchandise demand. The brand was explosive among the tourist set. When Earl set his sights on double-sized locations in proportionally heavy markets, he already knew who to call.