Universal Orlando Resort's Year of Construction: A Closer Look at What's in the Works 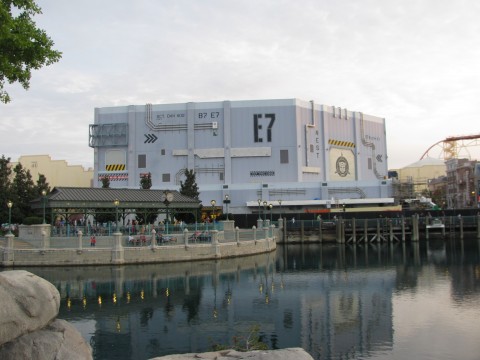 You can expect regular photo updates from Walt Disney World, Universal Orlando and the Disneyland Resort on Theme Park Tourist this year. In her debut article, our Universal Orlando correspondent Amy takes a look at ongoing construction work at Universal Studios Florida.

Universal Studios Florida has been undergoing extensive construction over the past year. So much so, that the 2012 Halloween Horror Nights was actually given a construction-related theme and the goblins and ghouls were said to have been unearthed from beneath the park's foundations. At times, you've been able to spot as many as five massive cranes hovering over the park. If you're wondering what all the work is about, you'll find that the answer is a mixed bag of fact and rumor. Here's a look at the current projects underway at the park. 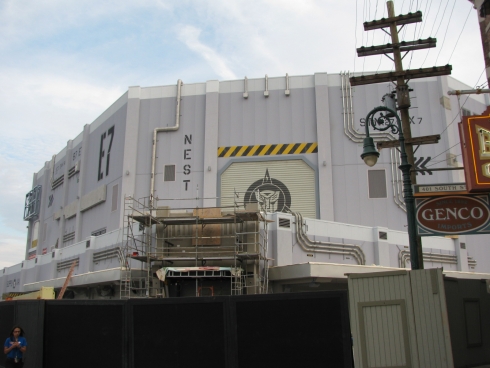 Construction on the entrance of Transformers: The Ride

The most widely-publicized construction project at Universal Studios Florida is Transformers: The Ride. This massive building sits where the Murder, She Wrote Mystery Theatre, and later the Hercules and Xena: Wizards of the Screen attractions once resided. The more recent of these closed its doors in 1999 and the building sat moldering for more than a decade before it was torn down to make room for the Transformers attraction.

The coming of the Transformers ride was officially announced in November of 2012 as a special opening segment to the evening's Universal: Cinematic Spectacular show. Shortly after, a full-size Bumblebee was installed outside the park gates. Though Bumblebee has since departed, you can't mistake the Transformers buzz in the park now. Not only is the exterior of the building nearly complete, the gift shop is now open for business. Team members decked out in khaki camo-print pants and untucked button down shirts offer a glimpse of the wardrobe that you can expect to see for team members operating the ride. Bumblebee and Optimus Prime stilt walkers are on-site for great photo-ops during the day. The ride is expected to open in summer of 2013. 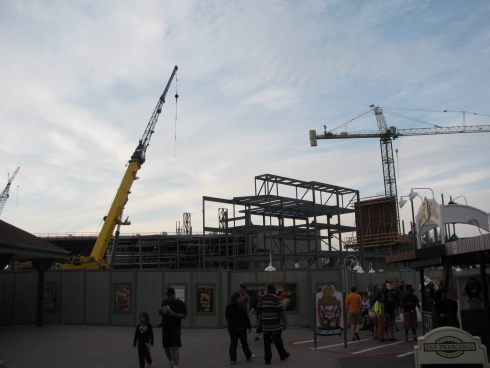 Construction at Universal Studios Florida in the Amity site

Though the looming cranes are largely gone from the Transformers construction site, it's clear that there's a lot more going on in the park. In the space between San Francisco and World Expo, you'll encounter a vast area of walled-off construction where Amity used to be. Rumors are running rampant that this will be the much-anticipated Harry Potter expansion. Despite the total conviction of most visitors as to the purpose of this area, Universal has yet to make any official announcement about the construction. Though the waterfront façade holds a strong resemblance to London architecture, none of the other buildings show any indication as to their final look or feel. 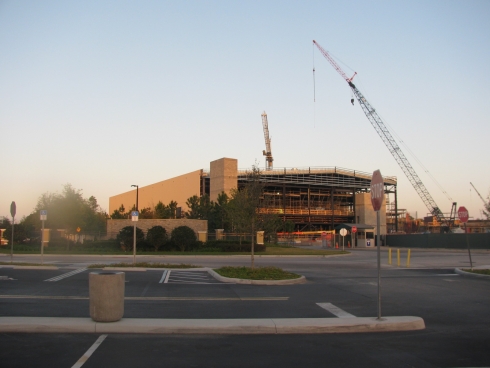 Universal Studios Florida construction visible from outside the park

The first building to go up in this area was a large show building that's readily visible from the team member parking lot. This is rumored to be the Gringotts Bank roller coaster ride. You can now see the beginnings of several buildings in the forefront of the area. Speculators have pegged this as the prime location for a Leaky Cauldron restaurant and several shops from Diagon Alley. Whatever the area is intended for, Universal's not spilling the beans.

Construction for the supposed Harry Potter expansion can also be seen in Islands of Adventure. A large chunk of what was once part of the Lost Continent has been walled off leading up the wall of Hogsmeade where you see the platform for the Hogwarts Express. All that peeks over the wall as yet are some mounds of dirt. If you want a clearer look, head to Dragon Challenge and choose to ride the Hungarian Horntail. This track of the coaster loops right over the construction site. There's nothing here but cleared land and construction equipment so far, but expect construction to pick up significantly later in the year.

Again, Universal's lips are sealed about this area, but the prevalent rumor is that this will be a full service train station for the Hogwarts Express connecting Universal Studios Florida with Islands of Adventure. Aerial images taken by the Orange Country Property Appraiser show what appears to be a clear pathway for the raised track of this train to connect the two parks. Universal has also filed permits for a "North Station," "South Station," and "Connectors" which further substantiate these rumors. While this poses several interesting logistical questions about how park tickets will work, the idea of riding the Hogwarts Express itself is certainly a thrilling concept for any avid Potter fan. 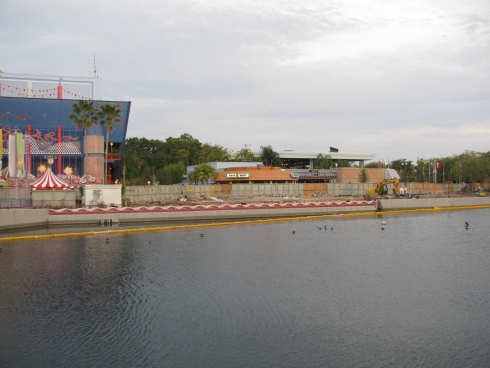 Construction along the lagoon in front of The Simpsons Ride

Head around to the other side of the lagoon and you're faced with even more plywood walls and clear signs of construction. The area surrounding The Simpsons Ride has shown massive growth in the past few months. The carnival games of Amity found a new home around the exterior of the ride. With an engaging Simpsons theme and prizes that feature favorite characters from the show, these side attractions are seeing a lot more attention than they garnered with a more generic boardwalk theme when they surrounded Jaws.

A long tract of land directly on the lagoon has been cleared and walled off for another Simpsons-themed expansion in this area. Rumor has it that this will be another attraction, rather than games or food carts. The limited space allotted here necessitates that this be a much smaller attraction than The Simpsons Ride, however. 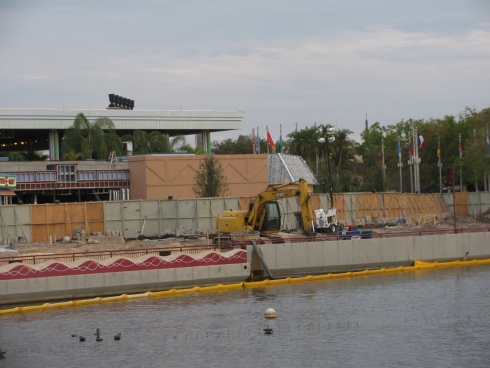 Construction of the rumored Krusty Burger and Moe's Tavern

Just past the Quik-E-Mart gift shop is the construction of what appears to be three distinct new facades. Though still unannounced, it seems clear from the shape alone that two of these are intended to be Moe's Tavern and a Krusty Burger. The International Food and Film Festival restaurant in this area has since been demolished to make room for the expansion, so it would only make sense that another food and beverage location pop up to replace it.

It's clear that the coming years have a lot of exciting developments in store for Universal Studios Orlando. To accommodate the expected influx of guests, a fourth on-site hotel is also in the works along Turkey Lake Road. The Cabana Bay Beach Resort is already accepting reservations for stays scheduled March 31, 2014 or later. If your budget won't allow for multiple visits over the next few years, you may want to hold off until the cranes are hauled away and the new face of Universal Orlando is fully unveiled.

the building has now been painted in the exact colour of moes tavern.

so take that has confirmed.