2012 promises to be a great year for new theme park rides across the globe, and the UK in particular will benefit from a number of investments; not from just the high profile chains, but also from some of the smaller, independent parks.

Whether it's high-flying roller coasters, well-themed dark rides or gentle kids' attractions that appeal to you most, there's something new on its way to suit you. Here's a run-down of the most exciting new theme park attractions opening in the UK in 2012.

LEGOLAND Windsor adds something new nearly every year and 2012 will be no exception. The brilliant Miniland, a LEGO recreation of a number of famous locales from around the world, will receive a brand new section themed to the Star Wars films. It seems a little strange to add a fantasy realm to what is currently a reasonably accurate view of the real world, but hey, this LEGOLAND we’re talking about, and as a Star Wars fan I’m not complaining.

The new area will feature scenes from all six motion pictures as well as the more recent Clone Wars animated television series. It will be located in a separate location from the existing Miniland, being housed in the former Rocket Racers building.

Alton Towers’ last installation was the much-hyped Thirteen roller coaster in 2010, a ride that was less than well received, and it seems that a new approach has been implemented for 2012. Two new attractions are being installed, both based on existing and successful themes.

The first is Ice Age Dawn of the Dinosaurs – The 4-D Experience. As the name would suggest, it is a 3-D film based on the third Ice Age film, Ice Age: Dawn of the Dinosaurs, with an added element of interactivity, thus defining it as ‘4-D.’ The attraction is sure to be a hit with families and the younger children considering the popularity of the films. It will reside in the Cloud Cuckoo Land theatre, which was previous home to the Go!Go!Go! Show.

The second new addition is Nemesis Sub-Terra, which of course builds on the park’s hugely popular B&M inverted roller coaster, Nemesis. Nemesis opened in 1994 to rave reviews and still tops many enthusiasts’ lists, mainly on account of its strong story and impressive theming. Nemesis Sub-Terra looks to capitalise on this and we can only hope that the same attention to detail will be given to the ride.

As with so many Alton Towers projects, the construction of Nemesis Sub-Terra has been veiled in secrecy, helped considerably by the fact that the ride is indoors. At the moment it is anticipated that the ride will pit you face to face with the legendary Nemesis beast, with the riders taking the role of The Phalanx; some sort of elite fighting squadron.

The actual ride section is believed to be a number of small drop towers manufactured by ABC rides, similar to the miniature drop tower Extremis at the London Dungeon. Considering the size of the pit that has been dug it seems likely that these drop towers will be slightly taller than the 5m of Extremis, but either way the thrill will be generated as much by the atmosphere as the drop itself. If it’s pulled off right, this could well be one of the best dark rides in the UK.

Madagascar Live will be Chessington World of Adventures’ equivalent of Alton Towers’ Ice Age 4-D, taking a share of the similarly successful Madagascar film franchise. However, unlike Alton Towers’ cinematic version, Chessington will be putting on a live show, involving numerous characters from the films. The attraction will be housed in the updated Toytown area, rethemed to an African village. Chessington’s aim to incorporate natural themes is bold and innovative, but it worked with Wild Asia (replacing Beanoland) and should work here too.

Paulton’s Park has been a very fast rising name in recent times, mainly due to the unprecedented success of 2011’s Peppa Pig World. Like all good businesses the park has chosen not to rest on its laurels, but instead to follow it up in 2012 with another large investment. But this time the attraction’s target market is certainly at the older kids.

Details for the new ride, Magma, have been slowly unravelled by the park in viral methods similar to Thorpe Park’s Saw and Gardaland’s Raptor, (which demonstrates the company Paultons Park wants to keep) and this has certainly built the excitement up in the theme park community. Eventually it was announced that Magma will be a drop tower ride, built by SBF Rides, and standing at 85-feet-tall. The ride looks to be impressively themed to a volcano, with the base sitting in the caldera. Exactly how the ride will operate is not yet known, but it appears that it will launch upwards, simulating a blast of lava, before dropping back down to earth; rather than just a simple drop. Although Magma will certainly be the most intense ride at the park, I think we can anticipate that it will not be as extreme as many other shot-and-drop towers around, and Paultons Park will continue to cater mainly to younger children.

Pleasurewood Hills has had a rather turbulent, and interesting history (it was owned by Deal or No Deal’s Noel Edmonds at one point), but is very much on the up these days. In 2007 the park managed to turn around a decline in attendance by installing Wipeout, a Vekoma Boomerang, and for 2012 it is continuing in the same vein by adding another major thrill attraction, The Jolly Roger.

In fact, the park is trying to give its whole image a good clear-up; a kiddie drop tower is also being installed, some previously temporary rides are being made permanent and a new logo and website have been implemented, all to try and stir up some well deserved attention. 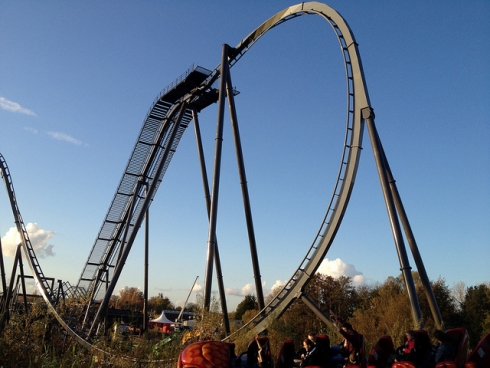 The Swarm could top enthusiasts' lists this year when it debuts in March. Image © Neil Zone

There’s simply no doubt that The Swarm is the most anticipated ride in the UK for 2012. As everyone who’s not living under a rock will know, The Swarm is a B&M Wing Rider, a new model of sit-down roller coaster where the train straddles the track and has two seats overhanging on each side.

So much has already been said and speculated about this monster of a ride, but as opening day draws ever closer the theming looks better by the day. The post-apocalyptic theme is a hard one to pull off; you can’t make it look too messy, otherwise it appears unfinished - but from the images it’s looking mighty impressive. As well as the head-chopping plane wing on the first drop there is also a destroyed fire engine and a helicopter.

The ride stretches 127 feet into the sky (making it the second tallest ride at the park) and will hit nearly 60 miles per hour durings its four-inversion course. Reports from test riders suggest that The Swarm is even more powerful than it appears, and with the rave reviews of Gardaland’s Raptor, the first B&M Wingrider, we could see the UK’s best roller coaster in years.