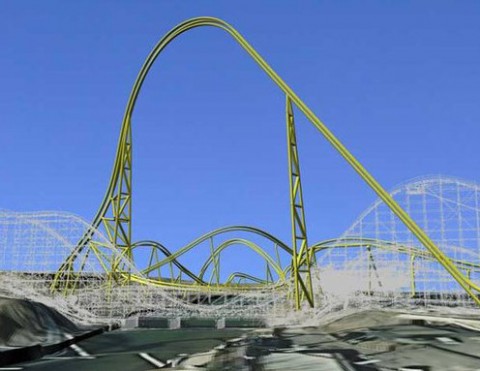 Riding high on the innovative coaster announcements for the 2012 season, Hersheypark in Hershey, Pennsylvania has announced its own mega-coaster set to debut next spring.

The park (named after and founded alongside the internationally well-known chocolate company behind Reese’s Cups, Hershey’s Kisses and more) will add a sweet new addition to its already mouth-watering line-up of attractions when Skyrush opens in May.

Despite the consistency and old-fashioned styling of their chocolate creations, Hersheypark has never been one to shy away from innovation. The park’s most recent additions, Fahrenheit (2008) and Storm Runner (2004) offered a 97-degree drop with Maverick-style layout, and a one-of-a-kind Wild West launch coaster respectively. And when Skyrush opens, the trinity of incredible Intamin creations may indeed be complete.

At 200-feet tall and reaching speeds of 75 miles per hour, Skyrush will dominate the skyline of Hersheypark and provide an incredible spectacle as it towers above the park’s Comet Hollow area with only two supports holding the gigantic arch of track. And after the 32-person trains crest the enormous hill, there’s only one way to go: down.

Skyrush isn’t playing around. It’s 200-foot drop sends riders toward Earth at an 85-degree angle. Only five degrees from vertical, riders will certainly feel the wind in their face and their stomach in their throat as the decent begins.

The new coaster will not borrow its siblings’ twisted, compact inverting layouts, nor their hydraulic, high-tech launches. Rather, Skyrush will return to a simpler, lighter style of roller coaster: pure airtime, high-speed curves, and enough coiled track to impress even the most seasoned of coaster riders.

Skyrush will literally be built over the park’s classic wooden coaster, Comet, and will meander briefly along the carved-out river that gives Comet Hollow its name. Of course, any proximity to the water will be quickly relieved as the coaster leaps skyward in successively tighter hills and hairpin turns. Indeed, it seems that Intamin has taken all that it has learned through Cedar Point’s ground-hugging Maverick, Kings Dominion’s twisted, turning layout, and even the airtime-laden, bounding hills of B&M’s wildly famous Mega-coaster line to develop a one-of-a-kind attraction.

Imagine coasting high enough to look DOWN on a Comet. Skyrush is constructed over the park's classic Comet coaster and careens through the valleys of Comet Hollow. Image © Hershey Entertainment & Resorts.

Although the styling of this particular Intamin creation strays from the manufacturer's cutting-edge, experimental, unprecedented technology and styling, it wasn't willing to let this ride be “normal.” So expect a surprise when half of the train goes floorless before your ascent.

The trains for Skyrush are not unlike B&M’s new, second-generation hyper coaster trains with the V-shaped, receded-and-spread second-row providing panoramic views for all riders. But on Skyrush, that second row is literally floating on either side of the train, with no floor beneath. Hersheypark won’t let the unique seating arrangement go unnoticed: like Great America’s X-Flight and Dollywood’s Wild Eagle, Hersheypark is eagerly proclaiming Skyrush “the country’s first winged seat coaster.” 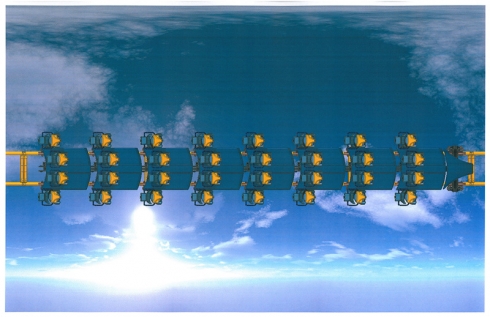 The trains on Skyrush will feature unique, floorless seating on the seats on either side of the train, providing panoramic views for all riders and an added freedom for thrill seekers. Image © Hershey Entertainment & Resorts.

Altogether, Skyrush seems to be a fantastic balance between the new and the old: the unique, half-floorless trains give thrill seekers a boost while friends and family might proclaim, “I’m not sitting there!” In addition, the ride’s thrilling statistics don’t mask that it is, at its core, a rolicking, high-speed, romp around the park that (if we imagine it to be like Intamin’s other recent creations) will be both smooth and edgy; comfortably floating one moment and ricocheting from side to side the next.

With five airtime hills and four high-speed, banked turns, one can imagine that Skyrush will keep riders guessing in a way that B&M’s airtime-hill-after-airtime-hill layouts may not. 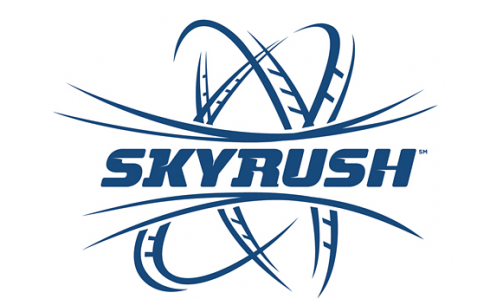 There’s no denying that this is a fantastic addition for Hersheypark – thrilling, but still family friendly with a 4’6” (137 cm) height restriction. And keeping with the outstanding capacity of similarly sized coasters, Skyrush will deliver an hourly throughput of 1350 riders. That’s nearly three times as many people per hour as Magic Mountain’s 2012 addition, Lex Luthor: Drop of Doom, and that means that lines for Skyrush will move quickly and efficiently through the day.

Altogether, Skyrush looks like a really nice addition to Hersheypark. It’s almost a little odd that a park of Hersheypark’s size hasn’t already come into ownership of such a basic, airtime and speed coaster amid so many eccentric and unusual ones. With that in mind, visitors may be a little peturbed by Skyrush’s apparent lack of features. Even with “winged” seating, it doesn’t offer the over-vertical drop of Fahrenheit or the launch and unusual twists of Storm Runner. It isn’t inverted like Great Bear or classic like Comet. To a seasoned visitor who has seen Hersheypark's innovative, perhaps even risky forays into coasterdom, Skyrush may seem a little too traditional. Hopefully their minds will be changed after their first spin on the coaster.

And indeed, while the simplicity of Skyrush may be its greatest detractor, it may also be its greatest selling-point, because it will deliver exactly what it shows: the tallest ride at Hersheypark, packed from beginning to end with quick, fun, free maneuvers. With effortless, smooth curves and sailing transitions, the coaster will be an experience other rides at the park can't match. And it will be a fantastic addition to Hersheypark’s already impressive lineup.