Michael Jackson's Captain EO reopened at Disneyland Paris in June 2010 after a twelve-year absence, as a tribute to the late pop superstar following his death a year earlier. Dedicated Jackson fans were delighted - but does the 3D science fiction musical stand the test of time, or has it dated too badly to maintain any retro appeal for visitors to Disney's European resort? We waded through the December snow and donned our 3D specs to find out.

Located in Discoveryland, Captain EO replaces Honey, I Shrunk the Audience - the attraction which displaced it when it closed in 1998. Disneyland Paris has not confirmed how long the show will be in place for, although it is believed that the attraction will operate for at least a year. The June opening date proved to be good timing for Disneyland Paris, providing it with a "new" attraction when the opening of Toy Story Playland at neighbouring Walt Disney Studios was delayed until August.

All of the Disney parks which previously hosted a version of Captain EO have brought it back following Jackon's death, with the movie also returning at Disneyland, Epcot and Tokyo Disneyland. Although all of the parks show the same 3D movie, the special effects used alongside it differ slightly according to the park.

With Honey, I Shrunk the Audience starting to look dated itself, was bringing back its predecessor the right decision for Disneyland Paris? And is the revamped Captain EO a fitting tribute to Jackson? Read on for our views. 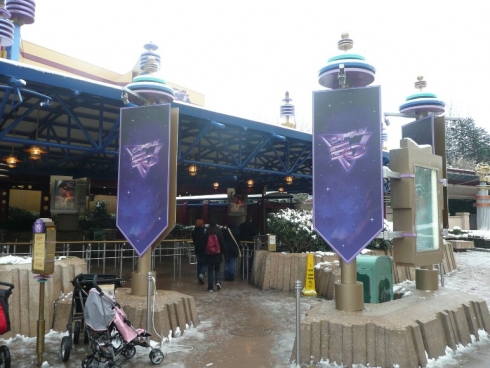 The exterior of the Captain EO theatre has a suitably 1980s feel to it.

Disneyland Paris made a rapid transition from Honey, I Shrunk the Audience to Captain EO, with the theatre being closed for just over a month to enable updates to be made. Perhaps inevitably given that the return of Captain EO is only temporary, the changes are largely cosmetic. Captain EO banners and posters adorn the exterior queuing sections, while the colour scheme inside has been updated where necessary. 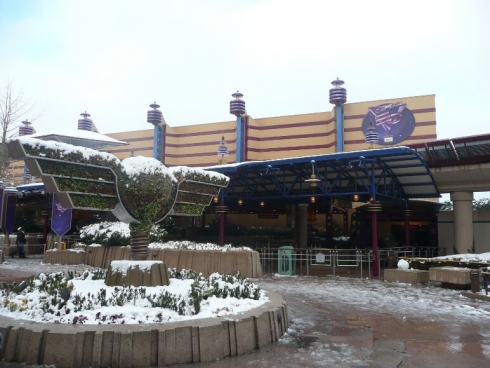 The Imagination Institute continues to have a presence outside Captain EO.

There are strong hints, though, that Captain EO is not expected to be around for long. Just outside the theatre building, a model of the Imagination Institute logo (featured in Honey, I Shrunk the Audience) remains in place. Inside, none of the changes would be too difficult to reverse when Disney decides that Captain EO has run its course. 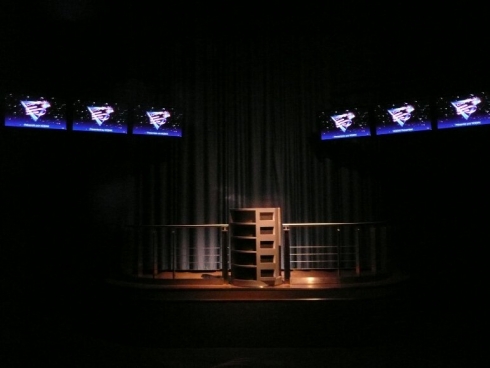 There are few changes to the pre-show area for Captain EO.

As with Honey, I Shrunk the Audience, guests are herded into a pre-show area prior to viewing Captain EO. After enduring a long, dull advertisement for sponsor Kodak, they take their first step back into the 1980s with a chance to view the original prelude to the movie (which was shown at its grand opening at Disneyland in 1986).

Embedded above (courtesy of Photos Magiques), the pre-show is an entertaining look back into the 1980s when Jackson was at the peak of his fame and the technology used to produce Captain EO was genuinely cutting-edge. It also serves as a reminder of just how far theme park attractions have progressed since then - something we hope Disney bears in mind when deciding how to replace Captain EO when it ends its run.

Taking on the Supreme Leader

Directed by Francis Ford Coppola, and executive-produced by Star Wars creator George Lucas, Captain EO's plot sees the eponymous Captain EO (played by Jackson) and the crew of his spaceship travelling to deliver a "gift" to the "Supreme Leader" of a mysterious planet. The influence of Lucas is clear, with the cartoon-like crew resembling a cross between Star Wars aliens and the Muppet Babies.

On arriving on the planet, Captain EO and his sidekicks are immediately captured by the Supreme Leader's henchmen and paraded before her. While the friendly characters (and Jackson's outfit) do appear dated (particularly flying "cat" Fuzzball and the clumsy elephant-like Hooter), the Supreme Leader is a genuinely impressive creation. Living in a damp, dark dungeon, the witch-like character (played by Anjelica Huston) wouldn't look too out of place in a modern blockbuster and it's a shame she doesn't have more of an active role in the plot.

For those who haven't seen Captain EO in its original or revised form, we don't want to give away too much about the plot. Needless to say, though, Jackson's character is required to burst into song and use a number of his trademark dance moves in order to save the day.

At just 17 minutes long, Captain EO a massive $30 million to produce. At the time it was the most expensive film ever produced if measured per-minute (at $1.76 million), however this has since been topped by Universal's Terminator 2: 3D at $5 million per-minute. Despite this, even the most ardent fans would have to concede that it looks almost comically dated in places - particularly when stop-motion animation effects are used to animate Captain EO's crew.

When Captain EO first opened at Disneyland Paris back in 1992, it made use of a wide range of special effects including lasers, explosions, smoke effects and starfields - bringing the action into the theatre itself. Unfortunately, these effects were removed during the conversion to Honey, I Shrunk the Audience.

Rather than bring the original effects back for the temporary Captain EO tribute, Disneyland Paris has instead made use of the moving seats, strobe lights and compressed-air effects that were installed for its replacement. Although some early reviewers have claimed that the Paris version is superior to the one in California, we barely noticed the effects. Whereas they were closely tied into the 3D movie for Honey, I Shrunk the Audience, the lightweight seat rumblings and air blasts feel like an afterthought when used alongside a movie they clearly weren't designed for. 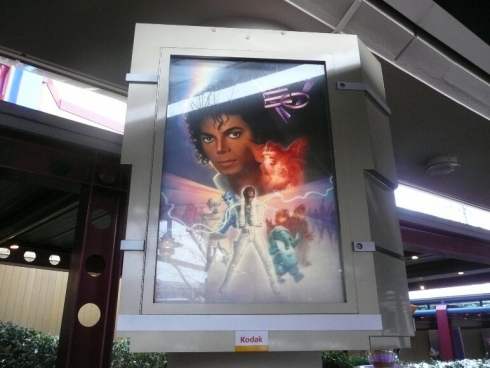 Captain EO is unlikely to stick around for long at Disneyland Paris.

Even for those who are not huge Michael Jackson fans and didn't experience the original, Captain EO is well worth seeing now that it has returned to Disneyland Paris. The whole experience, from pre-show to exiting the theatre, is like stepping back in time to when Jackson was a global phenomenon and 3D was in its infancy. The film may not have the "wow" impact that it had back in 1986, but it's difficult not to be entertained by the experience. We'd like to have seen the original effects make a return, but for a temporary tribute this was never very likely.

On the negative side, for most visitors there is little reason to experience Captain EO more than once and it is unlikely to draw many repeat viewers. With Star Tours also showing its age, and Space Mountain: Mission 2 becoming more painful than enjoyable to ride, Buzz Lightyear Laser Blast is the only truly up-to-date ride left in Discoveryland.

With the park's 20th anniversary year fast approaching, we think it's time for Disneyland Paris to invest in upgrading Discoveryland. What was once the most original and unique land in the park is starting to decline, and is badly in need of an uplift. With Disney already developing Star Tours: The Adventures Continue for its US parks, and likely to develop a permanent replacement for Honey, I Shrunk the Audience as well, it should be possible to add two "new" attractions without the resort's limited finances being stretched to the limit.

If you are planning to visit Disneyland Paris and haven't had a chance to experience Captain EO in its new form, be sure to give it a look. If you're on a tight budget, though, it might be worth waiting for 2012 when the long-rumored Ratatouille dark ride should make its debut at Walt Disney Studios - and Disney may have found a permanent attraction to sit in Captain EO's former home.