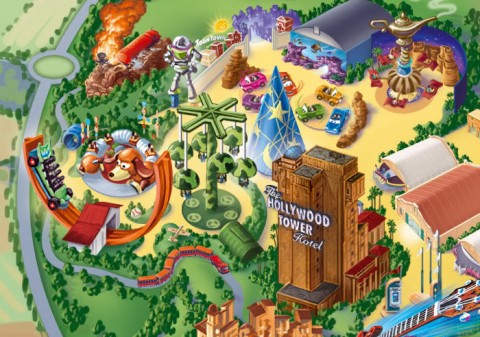 On August 17, 2010, the Disneyland Paris resort will open its latest addition, the Toy Story Playland area at the Walt Disney Studios theme park. Featuring attractions and theming based on Pixar's popular Toy Story movie trilogy, the new land is designed to boost attendance at the struggling resort. This preview takes an in-depth look at what awaits the first visitors to Toy Story Playland, aided by first-hand observations from Theme Park Tourist reader Paul Douglas.

In common with Disney California Adventure (the second gate at the Disneyland Resort in California), Walt Disney Studios received a lukewarm reception on opening in 2002. Both parks have benefited from the addition of clones of Walt Disney World's Twilight Zone Tower of Terror, with the Paris version opening in 2007. However, whereas the US park is addressing criticisms of its lack of attractions and lacklustre theming with a $1.1 billion expansion program, Walt Disney Studios is making do with a more modest €70 million investment in the Toy Story Playland area.

Perhaps unsurprisingly, Disneyland Paris has already been panned by some critics for being too unambitious in its plans for the new land. Although it features three all-new attractions (each themed around a character from the Toy Story movies), all are versions of existing "off-the-shelf" rides seen at other parks around the world. Inevitably, this has drawn unfavourable comparisons with the innovative Toy Story Mania attractions opened at Disney California Adventure and Disney's Hollywood Studios in the US (and due to open at Tokyo DisneySea in 2012).

Despite these concerns (and perhaps boosted by low expectations), reactions from print and online journalists to early tours of Toy Story Playland have been largely positive. So will the limited scope and size of the new land restrict its appeal to visitors, or will classic Disney theming and the range of new attractions mean the area adds up to more than the sum of its parts? We asked Paul - who recently visited the Disneyland Paris resort - to give us his first impressions.

Paul explains the context of his initial views: "The area was still cordoned off during our visit but I was able to get a few looks into the area from various places, most notably the Studio Tram Tour looks directly onto the area for much of the first couple of minutes of its run time."

A world in miniature

Toy Story Playland is designed to place guests directly into the world of the toys from the movies, with the backstory being that Andy has gone out with mom and left the toys free to "come to life" in his garden. To achieve the desired level of immersion, Disney's imagineers have dotted large-scale models of the toys around the area, including a model of Rex the dinosaur and a towering Buzz Lightyear figure that stands over the land's entrance. The video below, courtesy of YouTube user Crumser, shows Buzz in action:

A recent preview on the Telegraph website praised the level of attention to detail in Toy Story Playland, with even litter bins and handrails carefully designed to look like elements from Andy's toy box. Paul was also impressed with the general look of the area, albeit viewed from outside:

"The area as a whole is pretty interesting to look at, and we were delighted to pass by the imposing Buzz Lightyear entrance. Buzz stands tall, towering over the obnoxious blue fence which kept us from entering, and you can clearly see several other toys behind him."

The first of the three new attractions that make up Toy Story Playland is the towering Toy Story Soldiers Parachute Drop. The theming of the ride is based on the tiny "green army men" figures that feature in all three Toy Story movies, and are seen parachuting on several occasions. The ride itself will simulate this experience, with guests being carried to the top of a 25-metre-tall tower and "parachuted" towards the ground. Manufactured by Intamin, the ride is a customised version of parachute drop attractions that are seen at several other parks around the world (including Jumpin' Jellyfish at Disney California Adventure).

Of the three new attractions in Toy Story Playland, Toy Soldiers Parachute Drop has probably been met with the most cautious reception. Some fans have questioned whether the tall structure will dominate the skyline of Walt Disney Studios (and even neighbouring the Disneyland Park), destroying the immersive theming of other areas. However, Paul thinks those fears are unfounded:

"The ride is certainly quite tall, but it comes nowhere near dominating the Walt Disney Studios skyline, which continues to actually be dominated by the Twilight Zone Tower of Terror and the Earffel Tower. That's not to say it's not visible in a number of places of course. It can be seen peeking over the tops of buildings in the walk down towards the Studio Tram Tour and can just about be made out from the area outside the back of Studio One. From the Tram Tour queue and loading area, it's very visible, just as it is in much of the Animation Courtyard."

Thrill ride RC Racer is inspired by the speedy remote-controlled car that plays a key role at several junctures in the Toy Story movies. The ride is a half-pipe rollercoaster, manufactured by Intamin and themed to resemble the Hot Wheels track that RC rides in the Toy Story movies. Once on board, riders soar backwards and forwards several times on the half-pipe track.

As with Toy Soldiers Parachute Drop, Paul says that fears over RC Racer's height have been overblown: "The RC Racer ride is seen most clearly, again, from the Studio Tram Tour. It too is fairly tall, but since it's further towards the back of the area than the Parachute Drop, it's more easily concealed by the park's existing skyline. Resplendent in bright orange, the track looks straight out of the movies, very much resembling the Hot Wheels track used by Jessie and Buzz for various tricks.

"I was able to catch a glimpse of the ride car by craning my neck a bit whilst on the Studio Tram Tour. RC was parked inside the ride building - which is not especially large - and looked very well put together. The car is larger than most rollercoaster cars, but a fair amount smaller than "Pirate Ship" rides. Which of course makes sense, since the ride itself amounts to a cross between these two types."

Like the other attractions in Toy Story Playland, Slinky Dog Zigzag Spin is a customised version of a classic Intamin attraction - in this case, a waltzer-style flat ride. The theme of the ride sees guests' attached to the "springs" of Slinky Dog as he chases his tail around a food bowl.

Although he was unable to get a close look at the ride, Paul does not see huge potential in Slinky Dog Zigzag Spin: "I did manage to catch a slight glimpse of it, and from what I saw it's largely as you would expect and is perhaps the least impressive ride of the three."

After viewing Toy Story Playland from beyond its construction wall, Paul has some concerns: "Disney has very much gone for the fastest, least complex way of reinvigorating Walt Disney Studios here. Toy Story Playland is most interesting thematically (indeed, its small size and lack of openness was not enough to deter me or others in my group from pondering aloud what it would take to get past the 8-foot blue fence). What it is not is a massively exciting collection of attractions. Sans the Toy Story theming, the area would be fairly uninteresting - particularly to older guests.

"It is also incredibly small. When in October I saw the area cordoned off for the beginning of construction, I half expected something a tad grander than what was delivered. Which is not to say that it doesn't look great or it won't be a terrific area to visit. It's just...not very big or adventurous. Considering this is Disneyland Paris' only currently-known expansion (excluding the extension of Disney Village) and the rumoured Third Gate is still just a dream, it's a little disappointing. But perhaps Disney is merely doing the work in stages. After all, rumours persist of Toy Story Midway Mania showing up at the similar (to the point of near-identical) Toy Story Land in Hong Kong, so perhaps it will eventually appear in Playland too."

Disneyland Paris fans will be hoping that rumours of a $150 million dark ride based on Pixar's Paris-set animated movie Ratatouille prove to be accurate. It is widely expected to be constructed in time for the resort's 20th anniversary in 2012, and along with Toy Story Playland would add to a growing roster of attractions at Walt Disney Studios.

Toy Story Playland will finally open to the public on August 17, 2010, allowing guests to decide for themselves whether Disneyland Paris has spent its €70 million wisely. Despite his concerns about the small size of the area and the uninspiring line-up of attractions, Paul is still looking forward to visiting it: "What I saw was enough to excite me about the area and I definitely want to head back at some point after it opens to check it out."

Are you heading to Disneyland Paris in the near future? We'd love to hear your thoughts on Toy Story Playland. Please get in touch via e-mail to share your views.