5 Improvements Made to My Disney Experience This Week

When MyMagic+ first came on the scene back in 2012, we all knew that this system would be used for way more than just Fastpass+ reservations. And in the years since MyMagic+ debuted, we’ve seen this system used to help guests make advance dining reservations, view PhotoPas pictures, and even make merchandise purchases around Walt Disney World.

Yesterday, the My Disney Experience app got an update that brings even more functionality to this component of MyMagic+, introducing a new PhotoPass option for purchase and augmenting several existing features. If you are planning on going to Walt Disney World in the near future, make sure you are aware of the following changes and additions to the My Disney Experience app: 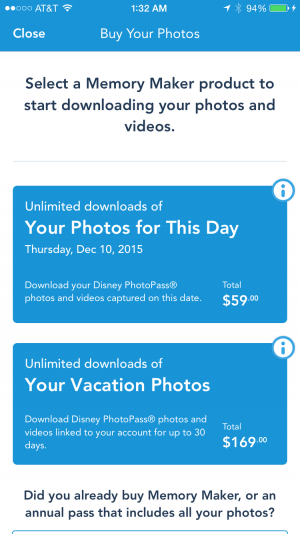 Earlier this week Disney surprised everyone by dropping the price of their PhotoPass Memory Maker products by double digit dollar figures across the board. Though this was certainly a bold move by the parks, it looks like Disney wasn’t quite done making changes to the PhotoPass program yet, as the resort used the update of the My Disney Experience app to launch an entirely new product: Memory Maker One Day.

As the name implies, this new product allows guests to download digital versions of all of their PhotoPass images from a single day for the low price of $59, which is less than half a dozen paper PhotoPass prints. Interestingly, this new product can be used either during the current day or can be retroactively applied to a single day in the past (up to 30 days previously). The only catch here is that this new feature can only be purchased from within the new version of the My Disney Experience app, and is not available to buy in the park. Given the nature of this service, advance purchase is also not available.

Memory Maker One Day sounds like a pretty good deal for guests, especially for those that want pictures from only a few days of their vacation and don’t want to pay nearly $200 for a bunch of pictures they don’t want. Though we hypothesized previously that Disney was trying to find a way to rescue Disney PhotoPass from obscurity, it looks like they already have a strategy in place to do just that, and are offering “budget” options like Memory Maker One Day to see if guests will spend more when the upfront cost is less. 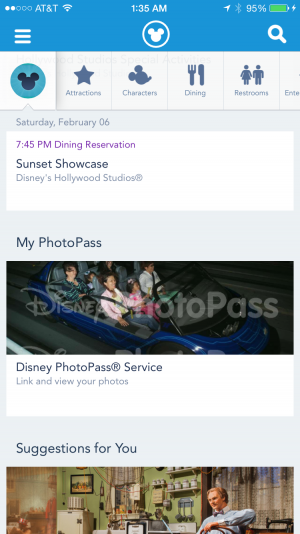 And speaking of Disney PhotoPass, the newest version of My Disney Experience really wants guests to know if they have taken PhotoPass pictures recently. Though images have always been available to view via the My Disney Experience app, recent images are now immediately viewable right below a guest’s FastPass+ and dining reservations.

This is a smart move by Disney as tapping one of these recent photos will bring guests to a hub where they can purchase one of the two Memory Maker options available for guests looking to download photos that have already been taken, which should (at least in theory) get more guests interested in purchasing this product. Because of the low cost of Memory Maker One Day, Disney is likely hoping that this new product will drive impulse purchases from inside the app, which is a shrewd and practical solution to PhotoPass' problems indeed.

Though some might be a little wary of Disney’s push for digital downloads of photos, this is actually in line with what’s happening around the resort as paper photo prints have been phased out at a number of locations, including Cinderella’s Royal Table and most recently the Chase Disney Visa character meet and greet, which used to come with a free PhotoPass print, but now only comes with a download code that can be redeemed to download all of the photos taken during the experience.

I would love to be able to make more FP+ reservations from the app. Once I've used my initial choices it's not always convenient to go to a kiosk for more choices when I have my phone with me at al times.