4 Secretive Projects That Could Transform Epcot at Walt Disney World

With new changes announced on a monthly basis for Disney's Animal Kingdom and Disney's Hollywood Studios, it's easy to forget that there are also some major changes happening at nearby Epcot, which is going through a transformation of its own. Though this metamorphosis isn't as dramatic as that of Disney's Hollywood Studios (which has been confirmed to be getting a new name in the very near future), some big projects are in the works at Epcot.

However, in a curious twist, many of these projects have only been partially announced by Disney, leaving fans with plenty of questions when it comes to the future of this park 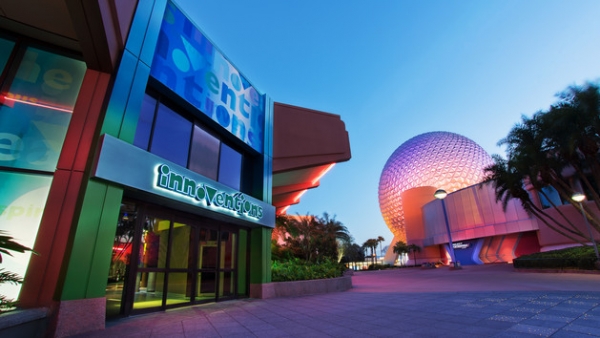 Though Innoventions West has only been closed for a few days, refurbishment walls have already gone up around the exhibits in this area as demolition on former attractions like Where's the Fire and THINK by IBM begins. Though guests can still walk through Innoventions West, the only areas that are not behind walls are the Visa character meet and greet and a row of PlayStation 3 game consoles that are running last-generation games.

Though we know that all the old exhibits are in the process of being dismantled and removed, what we don’t know is what is going into this new area. Disney has yet to announce what is coming to the Innoventions West building and the rumor mill has been oddly quiet regarding this space's future.

Could the Innoventions West building simply stand abandoned for awhile, like the former Wonders of Life pavilion? Or could this space transform into a new special event area while the considerable wasted space taken up by Wonders of Life gets transformed into something else? Something is clearly going on with this area, but it looks like we'll have to keep waiting on Disney before we'll be able to report any answers.

2. The mystery of the Frozen meet and greet in Norway

The plan to convert Norway into Frozen-land is well underway, with construction moving along at a brisk pace. Though we haven't had any recent updates regarding the progress of work on the Frozen ride inside the former Maelstrom attraction, construction walls went up several weeks ago around what will eventually be the Frozen meet and greet area parallel to the current Norway pavilion.

Interestingly, though permits have been filed and construction has begun on this attraction, Disney has not announced anything at all regarding the existence of this future meet and greet. Though this might not sound like a big deal ("it's just a meet and greet" I hear you say), this planned attraction's size has introduced an element of intrigue to this project, as the building for this new attraction will be a massive 13,000 square feet, putting it in the running for the largest meet and greet on property. One theory that might explain the size hypothesizes that this Frozen character experience will be similar to Enchanted Tales with Belle, which features a story-based character interaction with pre-show animatronics and a detailed set with seating for guests during the meet and greet experience. However, this is just a guess, and the giant building could simply be a super-sized Princess Fairytale Hall-style attraction.

Another big question with this meet and greet location is when it might open. Though we know the Frozen ride will welcome its first guests in 2016, that attraction is being built inside the former Maelstrom attraction, and will reportedly feature the exact same ride system, which shortens the development and construction timeline considerably. However, as this new attraction is literally being built from the ground up, it might be 2017 (or perhaps longer) before we finally get to check it out ourselves. Which of course begs the question: will Frozen-mania have died down by then?

Either the Frozen ride is being built from the ground up, or it is using the existing Maelstrom ride system. You can't have both.

I think that Frozen in EPCOT is great and EPCOT needs to change and I would like to update Universe of Energy or Wonders of Life!

big mistake changing NORWAY to FROZEN. I love Disney, but princesses do not belong in Epcot. They need to take Elisa's advice and LET IT GO. Keep the princesses in Magic Kingdom. Me and my family loved Norway the way it was and loved the Maelstrom and becoming from a Norwegian background found it to be a great experience.

Amen. I have said this from the beginning. I have even sent several emails to Disney, but they say most people agree with putting it there. I have heard less the 5 of the several hundreds if not thousands of people on various Disney lovers sites that like the idea, or don't hate the idea.