Late last week, Disney confirmed something that we suspected for quite some time: that Luigi’s Flying Tires was not long for this world. Though this attraction had its fans, the vast majority of guests who took a spin on it found it to be difficult to maneuver, and a little on the frustrating side. Luigi's Flying Tires used technology similar to what you’d find on an air hockey table, and was similar in style to Disneyland's short-lived Flying Saucers attraction.

Though Disney has not made any official statements about the re-imagined ride (other than acknowledging it exists), they did release a single concept art still (below). Looking closely, we spied several hints about what guests can expect from this new attraction hidden in this newly-released image.

1. The ride will indeed feature a trackless system 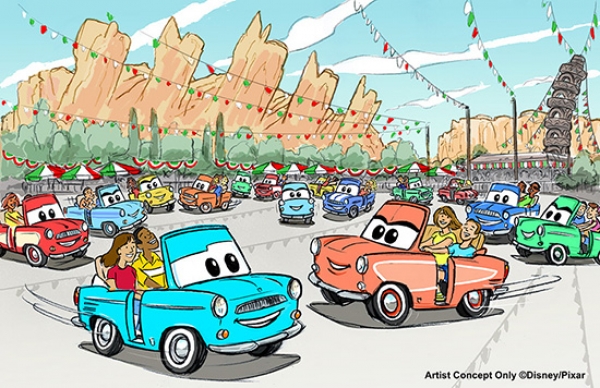 When this rumor first surfaced late last year, one thing that really stood out to us was the idea that a new ride would use a trackless ride system similar to that employed by the Ratatouille attraction at Walt Disney Studios Park at the Disneyland Paris Resort. Judging by the concept art that Disney released, it seems that this facet of the original rumor has been confirmed.

What remains to be seen however, is in what capacity this trackless system will be used. The rumor that surfaced last year implied that the new, reimagined ride would include “dancing” cars that would zip around in a pre-set pattern. The concept art seems to confirm this, with plenty of happy drivers sitting in cars all around the attraction, but we won’t know for sure until Disney releases more details about this upcoming attraction.

2. Cars vehicles will be used 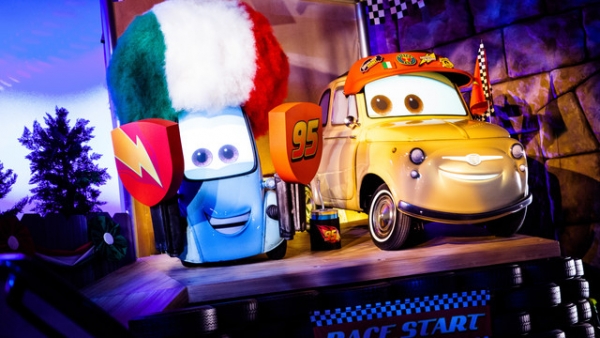 Though some questions remain about the functionality of the new ride system coming to this revamped attraction, one thing that is obvious is the total replacement of the ride vehicles. Gone are the chunky, flying saucer-esque tires, and in their place are some really fun looking retro vehicles that have been stylized to fall in line with the overarcing Cars Land theme, complete with the iconic Cars eyes and mouth.

Like the nearby Radiator Springs Racers attraction, the vehicles will not be based on specific characters from the Cars film franchise.