Wet 'n Wild Orlando has announced that it will open a unique new "racing" water slide for the 2014 season, dubbed Aqua Drag Racer.

The park, owned by Universal, claims that the slide will be the tallest and fastest of its kind in Florida. It will stand at 60 feet tall, and will allow guests to race each other through a series of twists, turns and steep hills while lying on a foam mat. Four riders will race each other at a time, hitting a top speed of 15 feet per second. 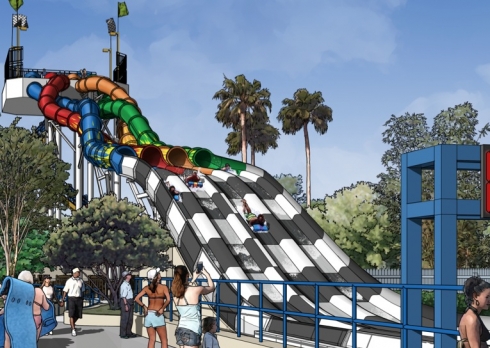 To make room for the new addition, the Bubba Tub family raft ride will be removed. Bubba Tub's 4-seater tubes differ from those on many of Wet 'n Wild's other multi-person rides, with guests sitting in a flat, circular raft facing each other. The slide itself is fairly familiar, though, packing three dips into its 6-storey-high circuit.

Wet 'n Wild plans to reuse some of the infrastructure from Bubba Tub, particularly plumbing work, to make the installation of the new addition faster and easier.

"The new Aqua Drag Racer will pull guests into a high-speed thrill ride unlike any other around,” said Michael Black, Senior Vice President and General Manager of Wet ‘n Wild. "This ride combines friendly competition along with the excitement of sharing the rush with family and friends."

Aqua Drag Racer is the latest example of Universal investing in its Orlando parks. 2014 will also see the debut of the long-anticipated Wizarding World of Harry Potter - Diagon Alley at Universal Studios Florida, and the owner Comcast has promised major new attractions for its Orlando properties every single year.

The new slide won't be the only addition to Orlando's water parks in 2014. Rival Aquatica, part of the SeaWorld Orlando resort, will open Ihu's Breakaway Falls in the summer.