Disney's Imagineers have confirmed several elements of Pandora - The World of Avatar, the new land that is currently under construction at Disney's Animal Kingdom.

The details of the land came out in a presentation given to Disney Cast Members by Imagineer Joe Rohde and Avatar producer Jon Landau. While the presentation didn't reveal a huge amount of new information, it did confirm several rumors that had previously been circulating about the nature of the Pandora - The World of Avatar experience.

Rohde is clearly exciting about the prospect of bringing the unusual world seen James Cameron's Avatar to life at Disney's Animal Kingdom. He said: "This is an extraordinary opportunity coming at us very quickly, for us to take the core ideas of this park and express them to the country and the world in an illustration through Avatar that is so incredibly vivid that it will bring added value to the entire place."

Landua, meanwhile, confirmed these three rumors about Pandora - The World of Avatar:

1. It will feature a "banshee" flying ride

We already know that the headline ride in Pandora will be a flying ride. The 3-D attraction is expected to feature much more advanced technology than the existing Soarin' flight simulator at Epcot, featuring four separate theaters spread across three floors. It has been rumored that riders will be in a lying-down position on the ride, much as they are on SeaWorld Orlando's Manta roller coaster.

The concept artwork above strongly hinted that the ride would see guests boarding "banshees", the flying creatures seen in the movie. Landau, explicitly confirmed this, referring to the attraction as "our banshee flying ride".

2. The land will feature bioluminscent "plants"

It's clear from Disney's concept art that lighting will play a very important role in Pandora's theming. This could go as far as "ripple effects" built into the sidewalk, as well as glow-in-the-dark plants (remember, Disney plans to open Animal Kingdom late into the evening once Pandora opens).

Landau confirmed this, saying: "We’re going to be able to do that by taking people deeper into the rainforest and see the bioluminescence, day or night."

3. Interactive experiences are on the menu 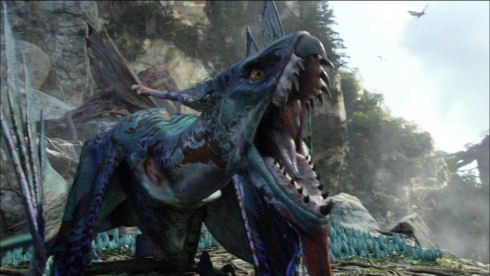 A number of interactive elements have been rumored for Pandora, possibly tying in with Disney's MagicBand initative. Rumors point to a walkthrough attraction and regular "visits" that will enable guests to see Pandora's inhabitants up-close.

Landau explicitly referred to the interactive nature of the land, saying: "The land itself is truly an attraction. It’s going to be interactive. It’s going to give people the opportunity to feel like they are truly in another world."

You can see the full presentation from Rohde and Landau in the video below, courtesy of Big Fat Panda:

You can find out everything we know about the new land at Disney's Animal Kingdom by checking out our extensive Pandora - The World of Avatar guide.