Disney recently launched its new promotional campaign for 2014, asking fans of Disneyland and Walt Disney World to "share their Disney Side". But what does it actually mean?

Every year at Disney's US resorts features a similar campaign. In 2013, the park has been running "Limited Time Magic", which has seen a series of one-off special events hosted in its parks.

Perhaps the best-known of these campaigns was the "Year of a Million Dreams", which was so popular that it actually ran for much longer than a year - from 2006 to 2009. This saw Cast Members randomly handing out ear hats, snacks, FASTPASSes and so-on to guests. Then there was 2010's Give a Day, Get a Disney Day promotion, where fans could receive free tickets to Disney parks in exchange for performing a day of volunteer work at Disney-approved organisation.

Unfortunately, it seems (at least initially) that there is much less substance to 2014's campaign. Instead, "Disney Side" is about getting fans to share their "personal relationship" with Disney with the world. That's a pretty vague notion, and one that sounds suspiciously like it actually involves Disney encouraging visitors to its parks to do its promotional work for it. 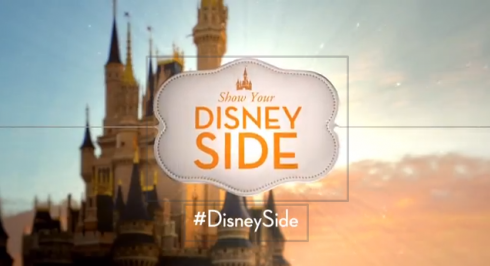 With Disney Side, the company is hoping to exploit the current craze for social media sharing services such as Instagram, Vine, Facebook and Twitter. If your child wants to ride Peter Pan five times in a row, Disney wants you to share that, making sure that you use the hashtag "#DisneySide", of course. What's in it for you? Well, you can always share your content on Disney's own website, DisneySide.com.

Ads for Disney Side are already airing across the US, showing things such as a family which lose their mother in an aquarium, only to find her swimming among the fish in time to the "Under the Sea" song from The Little Mermaid. Then there's one with a father who performs a Darth Vader impression in the local supermarket.

What will this mean for the in-park experience? Possibly very little, although Disney has previously used content shared by fans in its projection shows. You can also expect a host of competitions that reward those that sheir their Disney Side.

What's your favorite Disney Parks promotion from years gone by? Are you excited about sharing your Disney Side in 2014? Let us know in the comments below.

Can we all say WORST THEME EVER?????? Disney used to have wonderful promotions, I remember taking my kids the year you could get in free on your birthday-very special times. If Disney wants to see our side, they may have to look past all the silhouetted single fingers going up in the air.