Having released several teaser shots of the the trains for its new roller coaster, The Smiler, yesterday, Alton Towers has now posted some much clearer images online.

The latest photos offer a much clearer view of the over-the-shoulder restraints that will be used to hold guests safely in place. These contrast with the lap bars that have been used on other Gerstlauer Euro-Fighter roller coasters in recent years, although The Smiler's record-breaking number of inversions may have necessitated the use of the old-style restraints. 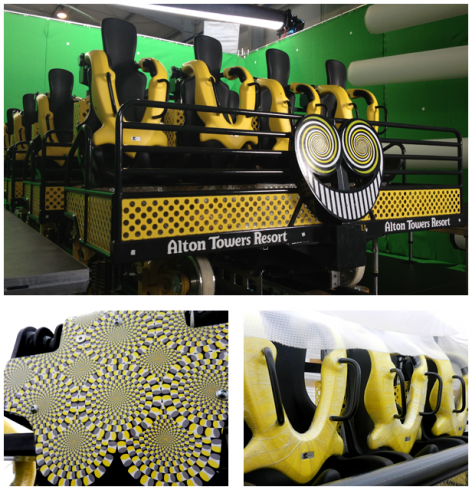 The Smiler, which had previously been known by its codename of "SW7", is currently under construction at a cost of some £18 million. Its circuit will feature two lift hills and a record-breaking number of inversions, and will be located alongside the existing Oblivion roller coaster in the X-Sector area.

The plot and theming of The Smiler is designed to tie in with The Sanctuary, the horror maze that debuted at the Scarefest 2012 Halloween events. To compensate for the absence of The Smiler in March and April, the park has brought back the maze for the start of the new season.