SeaWorld Orlando has launched a new mobile application to promote Antarctica: Empire of the Penguin, the ambitious new ride that will debut at the park in 2013.

The app boasts a number of features designed to offer guests a glimpse of "the world's coldest theme park ride", including teaser videos, details of the attraction and facts and trivia about penguins. It is available now from the iPhone and iPad via the iTunes App Store, with an Android version promised "soon". 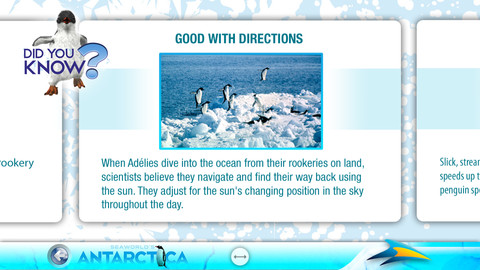 Meanwhile, the park has launched a promotional campaign dubbed the "Epic Voyage" to promote the new attraction. The roadshow will stop at a number of malls across America, and will feature a large ice dome, virtual reality experiences and real-life penguins. To encourage participation, free Coca-Cola will also be on offer from Freestyle machines. Full details can be found on the official Antarctica: Empire of the Penguin website.

The new attraction's plot will revolve around a gentoo penguin, who will lead guests on an adventure through icy waters from a penguin's viewpoint. Guests will be able to select one of several "thrill levels", with the 8-person vehicles behaving appropriately. They will eventually disembark their vehicles for a closer look at the penguins, in a similar experience to the existing Wild Arctic simulator attraction. The new exhibit will house gentoo, rockhopper, adelie and king penguins.