Thorpe Park is moving ahead with its plans to install a temporary hotel for the 2013 season, and is now advertising the accommodation on its official website.

The park applied for planning permission to install container-style bedrooms provided by UK-based portable accommodation specialist Snoozebox back in August. It has now dubbed the ad-hoc hotel "The Crash Pad", and is promising 2 day packages that will start at £64 per person. A total of 58 rooms, each sleeping up to 4 guests, will be on offer. Bookings can be made now via the official Thorpe Breaks website.

The Crash Pad appears to have been scaled back from Thorpe Park's original proposal, which would have seen 117 rooms installed on the site close to the park's entrance bridge. Each bedroom will be housed inside a recycled ISO shipping container, and will feature an en-suite wetroom. 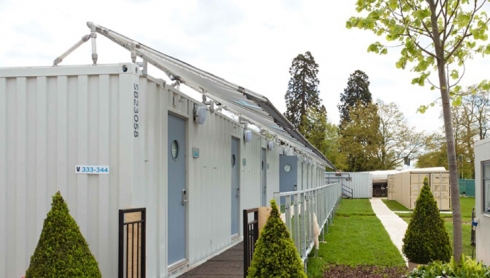 The temporary hotel will be very similar to those provided at this year's Diamond Jubilee Pageant in Windsor, as well as the Isle of Man TT races and the British Grand Prix. It will also feature two "motherships" (plant rooms) and a container that will act as the hotel's reception. Along with the rooms, these will be painted grey. A temporary boardwalk will link the site to the park's entrance bridge.

Each of the Snoozebox rooms will host a double bed and two bunk beds, along with a flat-screen television and a safe. Guests will be able to access the site and the rooms using a key card, and will also be able to visit Bar 360 and a late-night "chill zone". Thorpe Park promises that evening entertainment will be laid on during the season.

In June 2011, Thorpe Park received planning consent to install a much larger, 250-room permanent hotel on the site of a plant run by building materials firm CEMEX that was in place during the park's previous life as a quarry. The park submitted an adjusted plan in November 2011, and it cites delays in the approval of this as one reason for the move to install the temporary accommodation.