Walt Disney World has begun installing the track for the Seven Dwarfs Mine Train roller coaster, which will open at the Magic Kingdom in 2014.

Disney has released an image of the first track piece being lowered into place, which is embedded below. It will form a small part of the Snow White-themed coaster's circuit, which will feature both indoor and outdoor sections. The attraction will use a first-of-its-kind ride system that allows the vehicles to swing back and forth as they move along the twisting, turning track. 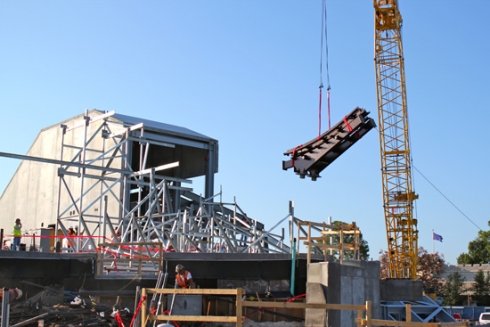 The Seven Dwarfs Mine Train is set to be a cross between a classic Disney dark ride packed with animatronics, and a traditional coaster experience. It will take guests on a musical ride deep into a diamond mine, accompanied by tunes from the movie's soundtrack.

The coaster will be the final new attraction to form part of the expanded New Fantasyland area at the Magic Kingdom. The Under the Sea - Journey of The Little Mermaid dark ride and Belle's Village area are due to open officially on December 6, 2012.