Universal Studios Hollywood has revealed that the 2012 incarnation of its "Terror Tram" Halloween Horror Nights attraction will be themed around The Walking Dead TV series.

The park's world-famous Studio Tour attraction traditionally undergoes a temporary makeover during the Halloween events, and this year's version will see hordes of zombies terrorizing guests. The undead will invade the Universal Studios Hollywood backlot, swarming over a number of sets from famous movies and TV productions. 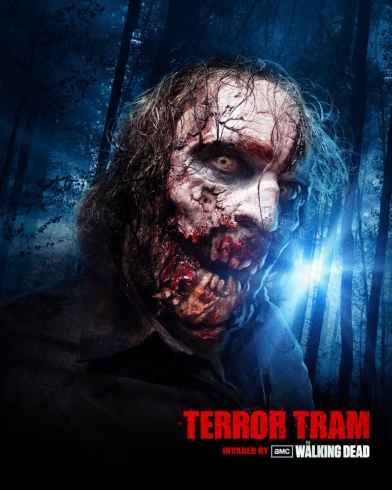 Describing the plans for Terror Tram: Invaded by the Walking Dead, Halloween Horror Nights Creative Director John Murdy said: "The Terror Tram is one of the most popular Halloween Horror Nights attractions since it's the only time people can walk on the historic Universal backlot where the horror film genre was born. The juxtaposition of the backlot's rural setting amid a small town devastated by a horrific plane wreckage complements the TV series' sets almost to a tee and provides the ideal backdrop to showcase the 'walkers' from AMC's The Walking Dead on a grand scale."

Terror Tram: Invaded by the Walking Dead is the latest attraction to be confirmed for Halloween Horror Nights 2012 at Universal Studios Hollywood. A horror maze dedicated to The Walking Dead, dubbed The Walking Dead: Dead Inside, will also be included in the line-up.

Universal Studios Hollywood's Halloween Horror Nights 2012 events are due to begin on September 21, and will run on select nights through October 31.