In preparation for Britain's Diamond Jubilee celebrations, LEGOLAND Windsor has installed a new model of the Queen in front of its Buckingham Palace model.

The miniature Queen will preside over the Miniland area of the theme park throughout the Diamond Jubilee celebrations, which will mark 60 years of Queen Elizabeth II being the country's monarch. The model stands at just 10cm tall, and features a crown that is encrusted with real diamonds. 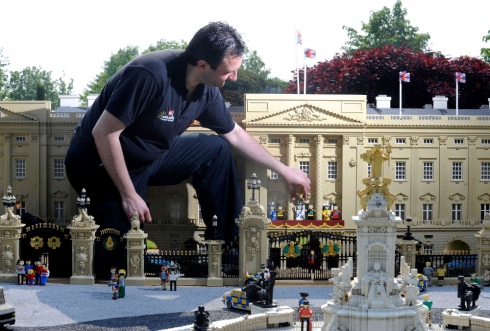 The 1.5cm tall crown is made of silver, coated with rhodium and decorated with the diamonds. A security guard will watch over Miniland's Queen during LEGOLAND Windsor's opening hours, with the model being stored indoors overnight.

The Queen is joined on the balcony of the Buckingham Palace model by recreations of the Duke of Edinburgh, Prince Charles, the Duchess of Cornwall, the Duke and Duchess of Cambridge and Prince Harry.

Describing the new Queen model, LEGOLAND Windsor's Divisional Director Sue Kemp said: "We decided to make a new Miniland figure of Her Majesty for the Jubilee celebrations but wanted to do something extra special for such a momentous occasion. As it’s her Diamond Jubilee the idea of giving our LEGO Queen a real diamond crown seemed very fitting and our talented model makers worked closely with Dinny Hall to create what must be one of the most unique – and smallest – crowns in the world; and one of the most valuable LEGO models!”

Designer Hall, who is based in London, said of her latest creation: "I have designed for a really wide range of people over the years but creating a piece for a minute LEGO model has definitely been unique. Not only is it a very delicate headpiece, it needed to fit perfectly on to a model made from square bricks and, although under 2.5cm in diameter, it had to stand out within the Miniland landscape. We think we’ve created something subtly beautiful, sparklingly fun and definitely fit for a Miniland Queen.”

LEGOLAND Windsor's Miniland recreates a host of landmarks from all over the world in LEGO form. It is one of the largest attractions at the park, which is located close to the Queen's castle at Windsor.