Walt Disney World has released a new image of the under-construction Be Our Guest restaurant at Disney's Magic Kingdom, showing off the large minotaur sculptures that will sit at its entrance.

The dining location will be housed inside a recreation of the Beast's castle, as seen in the the classic Disney animated movie Beauty and the Beast. It will form part of an expanded Fantasyland at the Magic Kingdom, and will feature interior and exterior areas that are closely modelled on scenes from the film.

Two minotaur sculptures will sit at the front entrance to the Be Our Guest restaurant. They were inspired by a scene in the movie in which heroine Belle first enters the Beast's castle. 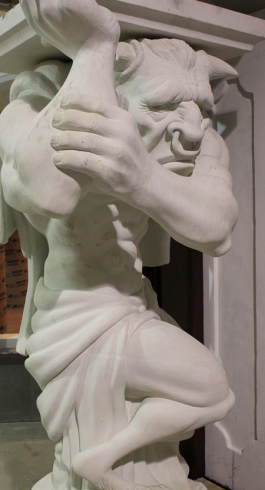 Be Our Guest will be the largest dining location in Fantasyland when it opens, boasting 550 seats. These will be spread across the castle's ballroom, gallery and "West Wing", and will offer fast food for lunch before switching to a full table service in the evening.

A range of all-new and updated attractions will feature alongside the restaruant in the Magic Kingdom's expanded Fantasyland. This will include the Under the Sea: Journey of the Little Mermaid dark ride, and the Snow White-inspired Seven Dwarfs Mine Train rollercoaster.