The start of construction work on a new Four Seasons hotel at Walt Disney World has been marked by a special groundbreaking ceremony.

The Four Seasons property is scheduled to open in 2014, and will feature 444 rooms, 3 pools, a "lazy river", a spa with 18 treatment rooms and extensive sports facilities including tennis courts and a climbing wall. Mickey Mouse was on hand to oversee the groundbreaking ceremony, as pictured below. 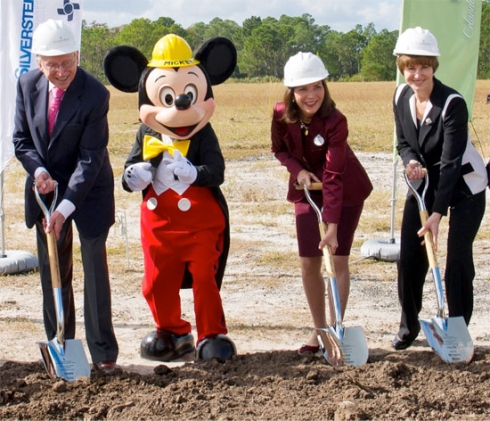 The Four Seasons hotel will offer a different option for visitors to Walt Disney World, with business travellers expected to make up a significant proportion of guests. Its construction will be financed by a consortium of investors, with Four Seasons itself holding a 30% stake.

Doubts had been raised earlier this year about the future of the hotel project, with the Four Seasons location having originally been due to open in 2008. It was subsequently delayed due to the impact of the global economic downturn, as well as being re-architected to ensure that its design matches that of the Golden Oaks residential subdivision that will surround it.