The full circuit of The Swarm roller coaster is now in place at Thorpe Park, with work now underway to add extensive theming elements ahead of its planned opening date in spring 2012.

The Swarm's circuit is clearly visible in the images below, which were posted to Thorpe Park's official Facebook page. The coaster will feature a unique 127-feet-tall inverted first drop, as well as a number of "near-misses" with scenery elements and several other inversions. 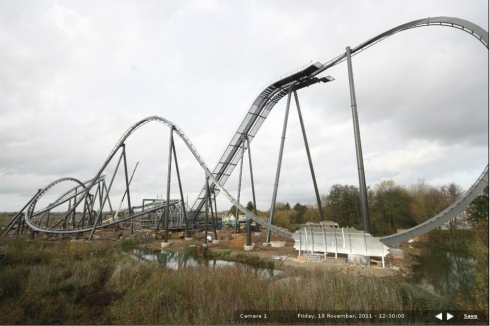 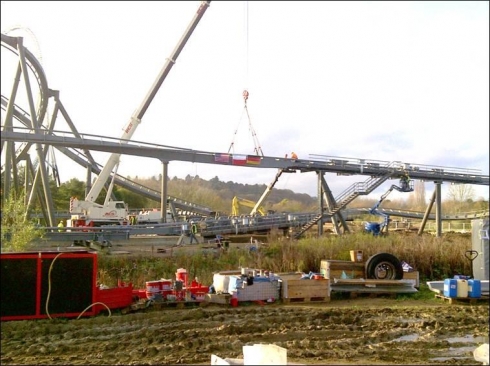 The Swarm circuit 2The final piece of track is lowered into place. Image © Thorpe Park

The Swarm will be the first Bolliger & Mabillard Wing Rider Coaster to open in the UK, with riders being seated on "wings" on either side of its trains. The theme for the new addition is based around war and destruction, with the coaster itself representing an invading "swarm" of aliens.

Work will now commence to install the surrounding theming. Plans for the Swarm have previously shown that the ride will offer a "fly-through experience through a crash scene", which will be populated with derelict buildings and vehicles. To match the depressing scene, the coaster's track is painted grey with grey-brown supports.

The ride's station will be one of its central features, and will be based on a burnt-out chapel or church. Dotted around the ride's course will be a number of elements designed to add to the disaster theme. These include life-size replicas of a crashed aeroplane close to the first drop, a crashed helicopter jutting out of a pond and a burnt-out fire engine.

Saw the SWARM construction whilst I visited Thorpe Park on the 27th Oct...

TBH the 1st big drop looks MASSIVE (Even compared to Stealth), to think that it is to be done inverted is another fear!!!