Video: Nemesis: What Lies Beneath? to open at Alton Towers in 2012

Alton Towers has launched a teaser website for its upcoming new attraction for 2012, revealing its name as Nemesis: What Lies Beneath?

The Alton Towers website, confirms several longstanding rumours about the indoor ride. This includes its theme, which as the name suggests will tie in with the neighbouring Nemesis rollercoaster in Forbidden Valley. Guests will enter into underground "catacombs", where they are likely to meet the Nemesis alien itself.

The teaser site features two videos, along with a selection of downloads. The first video is a brief trailer for the new ride, which confirms the catacombs theme and suggests that guests will be asked to follow in the footsteps of a missing team of scientists. It closes with the tagline: "What was once a secret hidden for decides is a secret no more. Do you dare to enter?"

The second video is the original Nemesis launch video from 1994, which reveals the backstory of the alien's discovery. While parts of the alien can be seen surrounding the Nemesis rollercoaster itself (along with a river of "blood"), Alton Towers had largely dropped the theme until its revival for the 2012 addition. 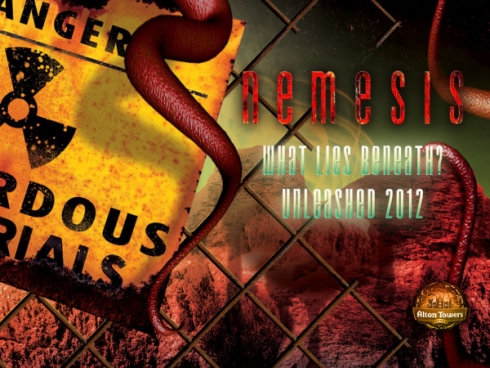 Nemesis: What Lies Beneath? is expected to be based around a miniature drop tower ride similar to that used in the Extremis attraction at the London Dungeon. The company behind Extremis, ABC Rides, recently let slip that it has agreed to install a version at Alton Towers next year.

Alton Towers' planning application for the ride revealed that it will be enclosed inside a large show building, and will feature heavy industrial and military theming. The drop tower is expected to plunge into a 6-metre deep basement, which is currently being excavated.