Six Flags New England is to open a Vekoma Giant Inverted Boomerang rollercoaster in 2012, with the ride almost certain to be relocated from Six Flags Magic Mountain.

There have been strong rumors in recent weeks that the Déjà Vu coaster at Six Flags Magic Mountain could be set to be removed, with Six Flags New England cited as a potential new home for the ride. Now, masslive.com reports that the New England park has confirmed that it will be adding a Giant Boomerang matching the description of Déjà Vu next year, with full details set be announced on September 1.

Making way for the new addition will be the Shipwreck Falls water ride, which will be removed from Six Flags New England. The relocated coaster will sit on the same site.

In common with other Vekoma Boomerang coasters, Déjà Vu sees being riders pulled backwards up a lift hill, plunging through several inversions following the first drop, and then repeating the course in reverse. However, it is larger than previous Boomerang designs and features a staggered seating arrangement on its trains. 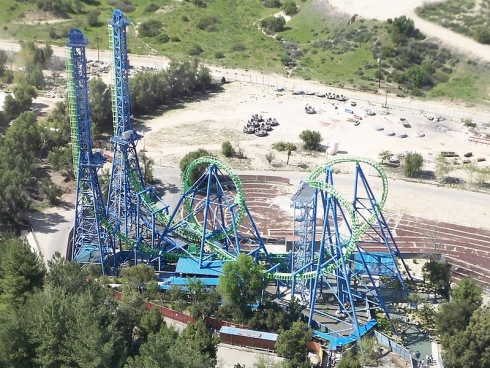 Déjà Vu has had a troubled history, with Vekoma's attempt to modify its popular Boomerang design resulting in serious reliability issues. Versions were installed at both Six Great America and Six Flags Over Georgia in 2001, but were subsequently removed in 2007. The version from Six Flags Great America has since reopened as Aftershock at Idaho's Silverwood theme park, after undergoing modifications designed to reduce downtime.

The news could mean that Six Flags Magic Mountain could lose the coveted "coaster capital of the world" crown that it regained from Cedar Point this year. The park opened two new rollercoasters in 2011, giving it more than any other park in the world. However, Six Flags could choose to move in another coaster from one of its other parks in order to ensure that Magic Mountain retains its boasting rights.