Mickey's Soundsational Parade to open at Disneyland on Friday, May 27

Mickey's Soundsational Parade is set to make its official debut at Disneyland tomorrow, with preview events having taken place already.

The new musical parade features a host of Disney characters riding on "whimsical" floats, accompanied by classic Disney songs. Among the Disney favorites to feature in the parade are Aladdin, Ariel, Peter Pan and Mickey Mouse, and live musicians are also a key part of each performance. 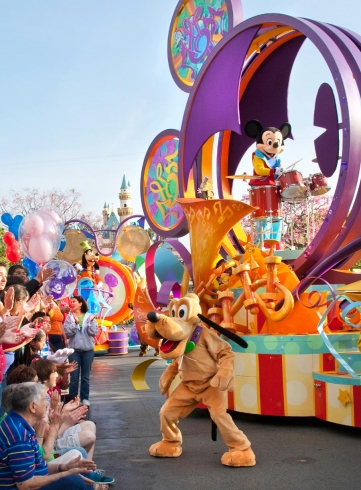 Featuring a total of nine newly-designed float units, Mickey's Soundsational Parade travels from Main Street, USA to It's a Small World. It celebrates a variety of musical styles, with Mickey and Minnie leading a six-member drum line, the Aladdin characters introducing cymbals, and characters from The Little Mermaid dancing to Caribbean-style sounds. In a new twist, the Disney characters play real instruments during the parade.

The new parade's debut comes at the start of a huge few weeks for the Disneyland Resort. On June 3, the highly-anticipated Star Tours: The Adventures Continue will open at Disneyland, with The Little Mermaid: Ariel's Undersea Adventure opening at Disney California Adventure on the same day. July 1 is set to see the completion of the Paradise Pier area at California Adventure, including the reopening of the updated Goofy's Sky School rollercoaster.