Opening date for Atlantis Submarine Voyage at LEGOLAND Windsor revealed as May 20, 2011

The opening date for LEGOLAND Windor's new £8 million attraction, Atlantis Submarine Voyage, has been revealed as Friday, May 20, 2011.

Completely LEGOLAND Windsor reports that Ian Grieve, Display Curator for the new ride, confirmed the opening date in an interview with BBC Radio Berkshire. Atlantis Submarine Voyage is set to be the "first LEGO-themed underwater ride in the world", and will combine a dark ride with Sea Life exhibits in a unique new concept.

LEGOLAND Windsor is promoting Atlantis Submarine Voyage through its official Facebook page, where it has now launched an online game based on the ride. Mission Atlantis challenges players to guide a submarine through the sea while avoiding hazards. 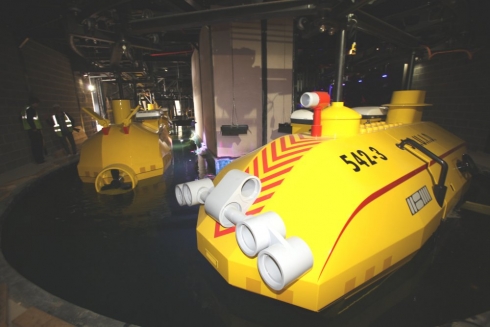 Atlantis Submarine Voyage will see guests boarding on-rails "submarine" vehicles for a trip through numerous marine exhibits and a LEGO recreation of the lost city of Atlantis. The submarines will travel around a 1-million-litre ocean tank, which will house over 50 species of sharks, rays and tropical fish. It will also hold almost 100 LEGO models.