The park made the announcement via its official website, having previously revealed that the coaster would open "around Easter". The family-friendly ride will be the first rollercoaster in Europe based on the popular Ben 10 children's cartoon show, and will be the centrepiece of a new area of the park themed around the Cartoon Network TV channel

Ben 10 - Ultimate Mission will be a variation on Vekoma's classic Boomerang design, dubbed a "Junior Boomerang". The photo below shows off its green-coloured track, including the 65-feet-tall first lift hill. Riders will be pulled up the hill backwards, traversing the circuit once in a forwards direction, before completing a return trip facing backwards. 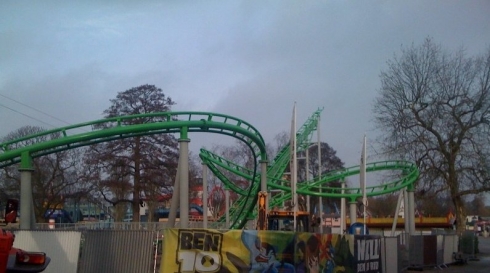 Ben 10: Ultimate Mission will feature a relatively short track length of 590 feet (180 metres), hitting a maximum speed of 34 miles per hour. The coaster will be able to carry around 850 riders per hour, which could lead to queues on peak days. To combat this, Drayton Manor is constructing a heavily-themed, interactive queue line which will incorporate a live pre-show.

The Ben 10 cartoon show depicts the adventures of 10-year-old Ben Tennyson, who is able to use a mysterious watch to turn himself into a variety of alien superheroes. The show debuted in 2005, being succeeded in April 2008 by a follow-up dubbed Ben 10: Alien Force. The latest series - Ben 10: Ultimate Alien - began airing on Cartoon Network in April 2010.

Ben 10 - Ultimate Mission will be the centrepiece of a new themed area.Image © Drayton Manor

Opened alongside the new rollercoaster on the Cartoon Network Street will be a new themed restaurant and a retail outlet selling merchandise based on Ben 10 and other Cartoon Network shows.

Ben 10 - Ultimate Mission will replace the Sombreros attraction, which was removed at the end of the 2010 season. In addition, Marvin the Martian in the 3rd Dimension has also replaced Happy Feet 4D in the park's 4D theatre.