Universal Studios Hollywood's ambitious expansion plans could see the addition of seven new attractions during the next 20 years, as well as the replacement of several old favorites.

The LA Times reports that the attractions due to be removed or replaced are Terminator 2: 3-D, the WaterWorld stunt show, the Special Effects Stage theater and several sets that feature in the park's famous Studio Tour. However, Universal also plans to add 146,000 square feet of new attractions, not including a dark ride based on the Transformers movies that is due to open in 2012.

The NBC Universal Evolution plan calls for the addition of a new residential community adjacent to the studios, which may result in some significant changes to the existing Studio Tour. This could include the removal or relocation of the Jaws lake, the Whoville village and the plane crash set from Steven Spielberg's War of the Worlds. To make up for the loss of these sets, Universal Studios Hollywood would add four new attractions to its backlot. It also plans to relocate the Wisteria Lane set from TV's Desperate Housewives and the Bates Motel from Psycho to save them from demolition. 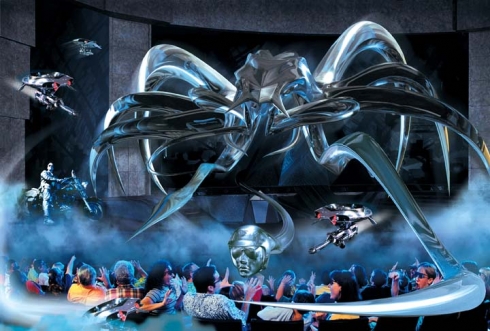 Terminator 2: 3-D has been subject of speculation that it will be replaced for a number of years, having debuted in May 1999. Rumors have already surfaced that a 4-D movie based on James Cameron's Avatar could be set to replace it, with Cameron having directed Terminator 3-D as well.

Los Angeles city planners recently released a draft environmental impact report on Universal Studios Hollywood's plans, marking the start of a key phase for the project. Following a 60-day period when the public is free to comment on the report, a series of hearings will take place next year. These will determine whether parent company NBC Universal can move ahead with the project as planned, or whether it will be forced to reduce the scope of the planned upgrades.

Full details of the plans can be found on the NBC Universal Evolution Plan website. The full environmental report can also be viewed online.