The creation of Hyperion Wharf, a nostalgically-themed waterfront area, is due to be completed by 2013. It will aim to recreate the look and atmosphere of a 20th century port city and amusement pier, and will feature a large number of retail outlets and restaurants.

Hyperion Wharf will be designed to be more family-friendly than the adult-oriented Pleasure Island, with a lakeside park being a key element. At night, the area will be transformed into an "electric wonderland", with an array of lights illuminating its buildings and walkways. 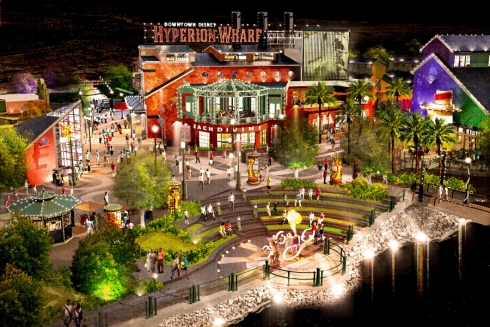 Disney claims that more than 1,500 new restaurants seats will be added as part of the Hyperion Wharf makeover, expanding the total dining options at Downtown Disney by more than 25 percent. 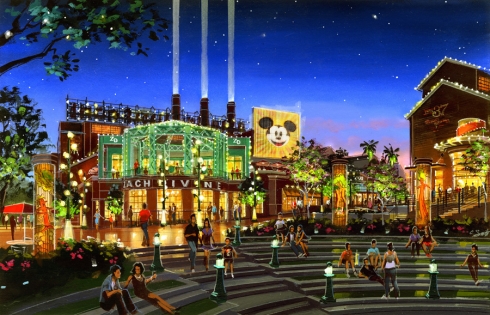 Mickey and friends will be visible in the family-friendly area.
Image © Disney

Construction on Hyperion Wharf will begin immediately, with Walt Disney World having already filed two construction permits relating to the former nighttime entertainment district. The permits indicate that the former BET Soundstage and Adventurers Clubs venues will be pulled down as part of the planned construction work. 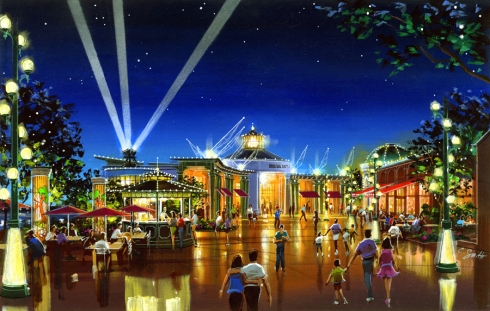 Hyperion Wharf will be illuminated at night.
Image © Disney

In addition to remodelling Pleasure Island, Disney has already revealed a number of other upgrades to the Downtown Disney area. These include:

Pleasure Island is located in the heart of the Downtown Disney entertainment and shopping district, and was aimed squarely at adults when it opened in 1989. In addition to its range of nightclubs, it offered street parties, live music and free-flowing cocktails, proving popular with locals as well as resort guests. However, attendance began to decline during the last decade and Disney announced the closure of the nightclubs in June 2008.

The projects to convert Pleasure Island into Hyperion Wharf and upgrade the rest of Downtown Disney are expected to create around 600 construction jobs, 500 retail, restaurant and entertainment jobs and to support 100 vendor and supplier jobs.