Discovery Cove has confirmed that it will open a brand new area known as the Grand Reef in 2011, alongside a new premium underwater walking experience.

The Grand Reef will span 2.5 acres, and will be built around a 1 million gallon saltwater aquarium packed with 125 species of fish, rays and sharks. The tropically-themed area will include white sandy beaches, an island lined with palm trees and hidden underwater grottoes. It is scheduled to open at SeaWorld Orlando's sister park in June 2011, with the official announcement video embedded below:

The aquarium itself will be split into a swimming area packed with exotic fish, and a separate tank filled with reef sharks and venomous lionfish. Only a sheet of glass will separate the two tanks, enabling guests to experience swimming alongside the more dangerous fish without coming into contact with them. 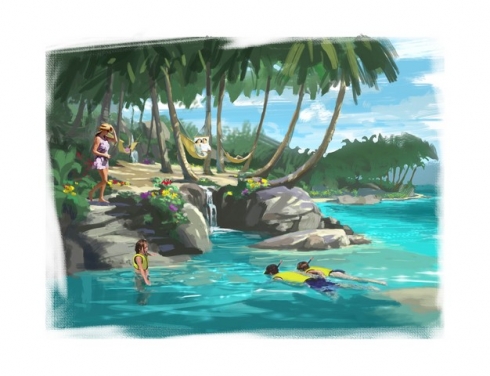 Guests will be able to snorkel around the world in the Grand Reef's aquarium. Image © Discovery Cove

Discovery Cove guests who visit the Grand Reef will be able to snorkel among canyons based on reefs from around the world. However, those who are unable or don't wish to swim can choose to paddle in the shallow waters, or take a walk across a rope bridge to the island to see sharks swimming below. 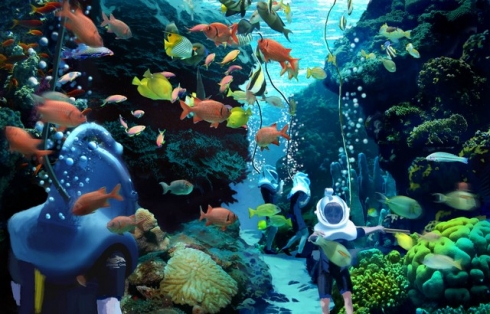 As part of the expansion, Discovery Cove will also be adding to its line-up of premium experiences with the SeaVenture underwater walking tour. This will see guests donning dive helmets and following a submerged path 10 feet below the surface, taking in close-up views of the Grand Reef's inhabitants. As with the park's other paid-for extras, the experience will be available to limited numbers of guests and is expected to cost $59 on top of Discovery Cove's standard admission price. Groups of up to 6 people will be able to take part, with the tour lasting approximately an hour.

The existing tropical reef at Discovery Cove will close when the Grand Reef opens, with the park having struggled to prevent saltwater from it leaking into the underground aquifer below. A new attraction will replace it in 2012, with details yet to be announced.

The Grand Reef project marks the first expansion of Discovery Cove since it opened in 2000. The park, which limits attendance to around 1,000 guests per day, aims to offer more intimate experiences than neighboring SeaWorld, such as the ability to swim with dolphins. It hopes the expansion will help it secure repeat visits in the future.