Disneyland President hints at long-term plans for return of PeopleMover

The president of the Disneyland Resort has hinted that the long-closed PeopleMover attraction could return in the future, although he insisted that there are no immediate plans to restore the ride.

George Kalogridis dropped the hint during a question and answer session at Destination D, an official Disney fan club convention. Asked about a possible return for Disneyland's PeopleMover, he cautioned that new safety requirements would prevent it from reopening in its original form, but did offer some hope that the ride could return eventually.

According to the Orange County Register, Kalogridis said of the PeopleMover: "What I do know is we could never bring it back as it was originally. But don’t worry. Everyone understands the passion everyone has for it. Hang in there."

Kalogridis went on to explain that new safety regulations would require stairways to be present at regular intervals along the ride's track, which would spoil the view for guests. The track would also require widening in order for it be reopened. 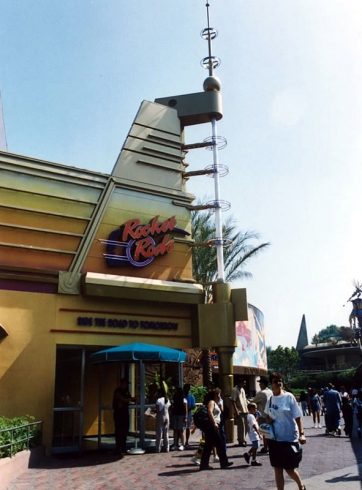 The Rocket Rods were a short-lived replacement for the PeopleMover.Image: Ellen Levy Finch Wikimedia Commons (License)

The PeopleMover operated from 1967 to 1995, carrying guests in small trains along an elevated track which circles Tomorrowland. After its closure, it was replaced in 1998 by the Rocket Rods attraction, a predecessor to Epcot's Test Track which saw guests blasted at high speed along the same circuit. However, severe technical issues (in particular, the weakening of the ride's support structure and the failure to install banked turns) led to the Rocket Rods' closure in 2001.

Although the PeopleMover track has laid dormant since the Rocket Rods closed, a similar attraction at Walt Disney World's Magic Kingdom (Tomorrowland Transit Authority) remains in place. It was renovated in 2009 to coincide with updates to the Magic Kingdom's Space Mountain attraction.

The original PeopleMover was at Disneyland in Anaheim, CA from July 2, 1967 to August 21, 1995 before it became Rocket Rods from May 22, 1998 to September 25, 2000 before it becomes blank.
In addition to Star Wars Land, starting around 2019-2020, in the same spot as opposed to the Old PeopleMover and Rocket Rods, it could be the New PeopleMover, it could be Boxcar Tour or it could be a ride with a normal speed that is more comfortable than ever before.