Blackpool Pleasure Beach is set to open a Twist 'n' Splash attraction in 2011 - potentially becoming the first park in the world to add the new Mack-designed ride.

The park's new addition was revealed in a report on Park World Online, which claims there is a possibility that Europa Park may install a Twist 'n' Splash first, in 2010. Mack unveiled the concept for the ride in November 2009, combining a traditional spinning tea cup ride with the "Splash Battle" water rides that have become increasingly popular in recent years.

As with all Splash Battle rides, seen at parks such as Legoland California and Alton Towers, riders are equipped with water cannons to soak other boats and spectators on-shore. Cannons can also be installed around the edge of the attraction, allowing the spectators to get their own back. 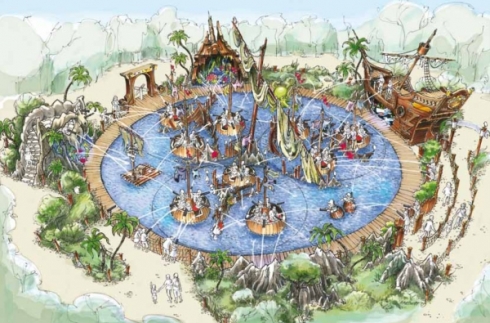 The innovation in Twist 'n' Splash attractions is that rather than simply floating around a course, the boats are part of a tea cup-style spinning attraction. The circular boats rotate on their own axes, and float free on the water, but are otherwise part of a fairly typical tea cup ride.

It is not yet known whether Blackpool Pleasure Beach will be getting the full version of the ride, or the "mini" version which is designed for younger children. The "mini" version can be built on a steel floor, and uses lower capacity 4-person boats as opposed to the larger version's 6-person boats.

The park today revealed that it suffered a huge £4 million loss for the year to April 5, 2009. Management blames bad weather and the recession for the poor performance, which it expects to turn around this year following cost reductions and the controversial introduction of a £5 admission fee.