Alton Towers has revealed the name of its new rollercoaster as Thirteen, claiming that it will be the "scariest ride in the UK".

The announcement ends months of speculation around the name for the £15 million ride, which has previously only been known by codename "Secret Weapon 6". The park revealed few other details of Thirteen, although it does claim that it may limit guests to one ride per day and only allow those aged 16-55 to ride.

Alton Towers says that the age restriction may be necessary due to the combination of physical and psychological terror - billing Thirteen as the world's first "psychoaster". In reality, the move would be unprecedented at a UK theme park and may well be a publicity stunt. The park may struggle, for instance, to justify to a healthy 60-year-old why they cannot board the ride with their 55-year-old partner.

The park's press release reveals few other details of the rollercoaster, which will open on March 20, 2010. It is already known that it will feature a "world's first" element - rumored to be a section of track which drops down to another level. It is known that the ride is themed around a haunted forest - with the Alton Towers website revealing shrouded figures who may play a part in the "plot".

The press release claims that Thirteen is built on the site of an ancient burial ground in area of "unexplored woodland". In reality, the new ride is built on the site of the famous Corkscrew attraction, which was removed last year. An indoor section will see guests enter an underground "crypt" - which is believed to be the location of the "world's first" element. 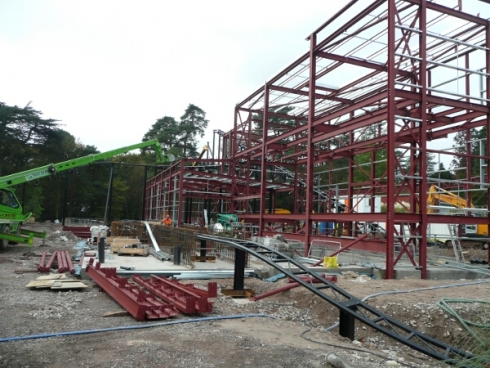 Alton Tower's sales and marketing director Morwenna Angove says of the new ride: "This new ride will be a shocking, never-experienced-before rollercoaster and we're excited that once again the Alton Towers Resort is able to offer visitors the chance to experience something unavailable in any other part of the world.

"However, just as we take physical health and safety very seriously, Thirteen demands that we also consider our visitors' emotional health, and as such we're not afraid of introducing necessary measures to ensure riders are fully prepared and healthy enough to brave Thirteen."

A special preview weekend will be held on March 12-13, the week before Thirteen's grand opening. Those willing to pay £99 per person, per night for a 2-night stay at the Alton Towers hotel can receive a behind-the-scenes tour of Thirteen - but a ride on it is not guaranteed.

Thirteen is the second "horror"-themed rollercoaster to be launched in the UK in as many years. Sister park Thorpe Park opened SAW: The Ride, based on the popular horror movie series, last year. Although it suffered problems early in the season, it has since proven to be a major draw to teenage audiences - making Alton Tower's age limit for Thirteen seem still more unlikely.

Theme Park Tourist will be attending the grand opening of Thirteen next year and will bring you exclusive video and photographs from the event.

This ride sounds amazing. I am slightly disappointed about the name I think 'Surrender' would have been a lot better but I bet the ride will be great!