Guests on Mission: SPACE feel the effects of a shuttle liftoff on this futuristic simulator. The intense ride experience includes four guests taking on pivitol roles at the control panel as they experience weightlessness through centrifugal technology and video queues. 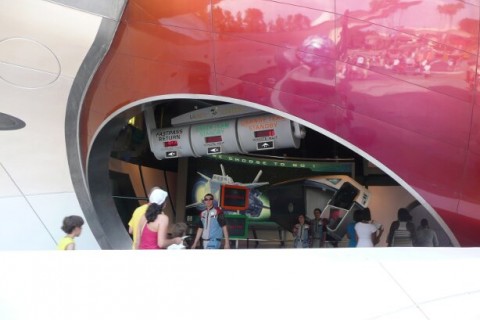 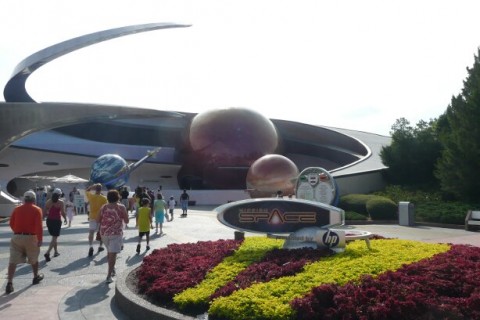 See all photos of Mission: Space

Mission Space: Blast Off to Adventure

Ever wonder what it would feel like to blast off into space in a shuttle, and experience the same sensations as the astronauts of NASA? Thanks to the Disney Imagineers, you now can - and while never having to set foot in an actual rocket - just by heading down to central Florida and walking into Future World at Epcot (one of the 4 theme parks comprising the Walt Disney World resort). The attraction: Mission: Space.

Before entering the building (and making sure you meet the 44" height requirement), you will first choose one of two types of rides, the orange "more intense" training or the green "less intense". The better side, in my opinion, is the more intense. If you're more hesitant about going in or are prone to motion sickness, you may want to opt for the "less intense" side. When you've chosen your side, you will receive an appropriately colored ticket from the Cast Member and then will head on inside to the orange or green side. Inside the building are a number of various photos, and pieces of information regarding the history of the space program. Also are model space rover vehicles and one huge display, that of a gravity wheel which was actually used in the 2000 film "Mission to Mars" (which coincidentally? also starred Gary Senise).

Eventually, you will be brought inside for your pre-flight checks. As narrated by actor Gary Sinise (no stranger to space travel, having appeared in the movie "Apollo 13"), you have signed up as a recruit at the International Space Training Center. Your mission? The first manned space flight to Mars. After a brief pre-flight briefing from "capcom" your group (of up to 4) heads out to be assigned their respective rolls for the mission: Commander, Pilot, Navigator, or Engineer. You will be brought into your ride capsules with these job titles listed for you, and at various points in the ride, you will have to press certain buttons to successfully complete your mission.

**NOTE: If you suffer from claustrophobia, you will NOT want to ride this as, after you sit down and lower the bar above your head, the doors close and the front panel with the main screen comes up close to you, so you may immediately feel like a sardine in a tin. You also will have a very brief moment or two of complete darkness during the middle of the ride, so be aware of that. If you don't ride, or chicken out, you can still go off to the after-ride area where you can send home pictures of yourself or play a few video games while you wait for the rest of your party.

For me, some of the absolute best parts of this ride are the initial blast-off as well as the initial descent to the Mars surface......these are the times you really feel your face pulled back by g-forces and where it feels the strangest when you merely try and left your legs or feet. It is the strangest feeling, but I have to say it's pretty cool too. I have no real complaints with the ride itself other than I wish the experience lasted a bit longer (it's only 4 minutes from when the ride itself starts til it ends). Interestingly enough, all of the sensations you feel during the ride are from your car spinning horizontally in a centrifuge. That's the feeling that, at times, has triggered some stomach nausea in people, or ended up affecting others much more seriously (due to their own previously undiagnosed health conditions).

But Mission to Mars really is a blast (pun intended) and one of the best attractions there is at Epcot. If you're not claustrophobic or prone to motion sickness, do yourself the favor of trying out the "more intense" side. It really is a cool experience.

At one point in time, there was very little in the form of big attractions at Epcot. The Epcot park has never been meant to be an attraction, but Mission: Space does a great job of sticking with the "Experimental Prototype Community of Tomorrow" as it gives you a chance to get a simulated feeling of a space shuttle liftoff.

Not only does this space shuttle liftoff, but you get to travel through space while taking one of four possible roles of the flight team.

There is a motion side and a non-motion side for those that experience motion sickness at all. The motion side only spins to create g-forces while you are taking off or using boosters for the space shuttle.

The ride is a great experience, especially for those who love the idea of space travel!