This 45 minute attraction including a number of films and a ride through a prehistoric setting with animatronic dinosaurs as Ellen Degeneres and Bill Nye the Science Guy team up to learn about where energy comes from. 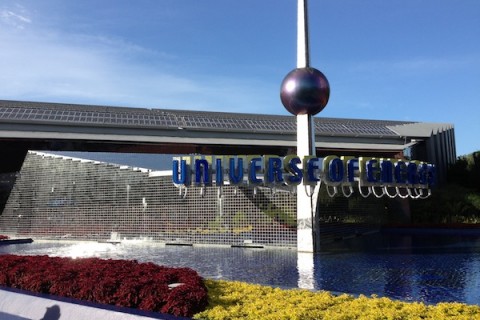 One of the attractions at Walt Disney World's Epcot theme park that I enjoyed as a kid (and I suspect many small children today still do) is probably referred to as "that dinosaur ride". The actual name of the attraction is Universe of Energy, of which the dinosaur section is merely one aspect of its overall message: teaching people about our energy needs, concerns, and resources found here on (and in) the earth.

The overall attraction has gone through several updates and versions, and the show today within Universe of Energy is called "Ellen's Energy Adventure" and stars celebrities Ellen Degeneres, Bill Nye (the Science Guy), Jamie Lee Curtis, and Alex Trebek. The gist of the story is that Ellen falls asleep watching Jeopardy and dreams that she's on the show, competing against Einstein and her high school rival, Judy (Jamie Lee Curtis) but is stumped when it comes to the category of energy. Enter Bill Nye, her neighbor, who takes her back in time to teach her what she needs to know about energy in order to go back and win on Jeopardy.

During the show, and this is the portion that most young kids look forward to, you're sitting in a large theater looking at some huge screen, and then the room moves around and you find yourself in large broken up sections of seats that move one behind the other through scenes set in prehistoric times, with the likely sounds, smells, and sites of the dinosaur age. You see herbivores, carnivores, and......an animatronic Ellen Degeneres struggling to keep up with Billy Nye through the land of dinos. Finally, after moving past the dino scenes, you're back in another large theater and you watch the final portion of the show. In all the show lasts approximately 45 minutes (with a new show starting every 17 minutes).

In my own opinion, the Universe of Energy pavilion, as a whole, is in serious need of a major overhaul. I still think the overall concept of teaching people about energy and energy conservation and so forth is a good concept, but both parts of the show (actors and dinosaur portions) need a complete reimagining. For the actor portion, I personally can't stand Ellen Degeneres, so I immediately get turned off by that portion of the ride. She's much more annoying than amusing and I know if you're the kind who likes her, you may enjoy the show, and if you don't like her, you won't care for it as much. It's just personal preference. As far as the part of the show where you're roving through the lost dinosaur world, aside from some cosmetic changes (the colors of the dinosaurs), the ride part today is exactly the same as it was when I first saw it as a child some 25+ years ago. I think that when Disney has much better dinosaur-themed rides (such as 'Dinosaur' over at Animal Kingdom) with animatronic dinos that are HUGELY improved over the ones still in use at Universe of Energy, then it means it's time for a change.

As it stands right now, if you haven't taken in the show at Universe of Energy, it's definitely worth seeing, because at least you get out of the hot sun and off your feet for 45 minutes, but it's really more of an attraction you can check out every now and again......not on every visit to Epcot.