Pirates of the Caribbean At Disney's Florida Park- Magic Kingdom

On this eight minute boat ride, guests travel through trecherous waters and a village raided by pirates and brought to life by special effects. This Disney classic is still ahead of its time and has been updated to feature unforgettable moments from the films.

Photos of Pirates of the Caribbean 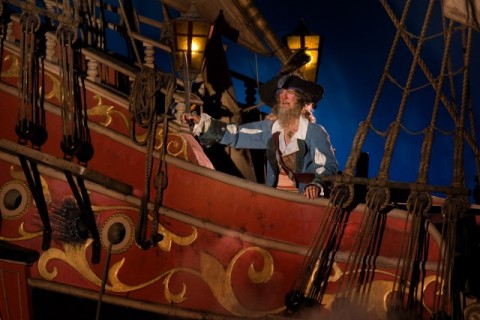 See all photos of Pirates of the Caribbean

Reviews of Pirates of the Caribbean

Degraded over the years...

First, Walt Disney World's Pirates of the Caribbean is terrible in comparison to the Disneyland version. But I suppose that doesn't make it a bad ride. My real issue with the attraction is that it may have once been 5/5 stars even in the Magic Kingdom; however, I feel that the incorporation of Jack Sparrow really hurt the ride (every animatronic is either Jack Sparrow or WON'T SHUT UP ABOUT HIM) and with the incorporation of political correctness, it makes for some very awkward scenes. At least the smells are nice and I suppose the atmosphere still works but this attraction has seen much better days.

Pirates Life for Me

As a kid, I was more interested in going on the Mountains when at Magic Kingdom. Now that I'm older, I prefer the rides like Pirates of the Caribbean and the Haunted Mansion. Ironically both having been the base for movie adaptations, with Pirates clearly being the better of the two.

Pirates of the Caribbean is a slow moving boat ride through what I assume is now re-themed as Tortuga from the movie. Although I have been on it before Pirates came out in 2003, I don't really remember it too much before Jack Sparrow and Barbossa was introduced to the ride. The classic elements are still there, and various pointers to the films, but overall the ride has improved in recent years due to the films success.

By no means a thrill ride, but it's the theming and attention to detail that makes this one of my favourites in Magic Kingdom.

Of all of the Walt Disney World theme parks, in my opinion the Magic Kingdom boasts the most "must see attractions" and Pirates of the Caribbean is most definitely on that list.

Today's generation of Disney World-goers and Disney fans may only know of the film versions of "Pirates of the Caribbean", thanks to Johnny Depp and his "Captain Jack Sparrow" character......but to set things straight, the ride has been around far longer than the movies. It was the film series based upon the ride, not the ride based upon the films. Although today that may be harder to tell since updates to the attraction have included the mysterious Davy Jones (played by Bill Nighy - also from the films), the evil Captain Barbossa (voiced by actor Geoffrey Rush), and even Captain Jack himself (voiced again by Depp) popping up in several spots throughout the attraction.

The attraction is housed in a building designed (impressively) like an old Spanish fort, and the basic plot to the ride (updated in recent years) has Barbossa and his scurvy crew of miscreant pirates attacking a coastal town in search of Jack Sparrow. The animatronics employed here may be old, but they're still very impressive, from the facial features of the pirates all the way to the meticulous details of their hairy legs dangling off the side of a bridge. In one of the first scenes, after a small drop in the dark (don't worry, you may only get literally 1 drop of water on your arm at most), you come upon Barbossa firing his cannons on the town. You can really feel the air-cannons at work, in time with the firing of the pirate cannons so that it seems like you're feeling the rush of a cannon ball soaring past your head.

Little ones may be briefly scared during the darker moments, which primarily are at the beginning of the ride (and include a skeleton steering a ship in stormy seas) but that can quickly be overcome because the rest of the ride is light. Part of the fun you can have as a rider is to see how many moments in the ride you can recall as showing up in the films (and there are quite a few, too).

One of the things I miss about the ride (having ridden it before and after the inclusion of elements from the movies) is that in the beginning there was a talking skull & crossbones, and even though you still hear its voice, they took it dow for some reason. It would be the one saying "dead....men....tell....no....tales".

Pirates of the Caribbean is by no means a thrill ride, but it is always fun. It's well air-conditioned in there (maybe too much for some) and that can make it a welcome break from strolling around the Magic Kingdom in the hot Florida sun. Disney has also seen fit (yeah, as if they wouldn't) for you to conveniently exit the ride into a gift shop where you can buy your little ones (or maybe even yourself) a variety of piratey knickknacks.

Oh, and it's almost assured that you'll find yourself whistling, humming, or singing softly under your breath "yo ho, yo ho, a pirate's life for me" afterwards, maybe when you least expect it.