It's a Small World At Disney's Magic Kingdom

A shallow, meandering river guides tour boats through "the happiest cruise to ever set sail," where hundreds of animatronic dolls representing cultures from around the world serenade visitors with the well-known title song.

Photos of It's a Small World 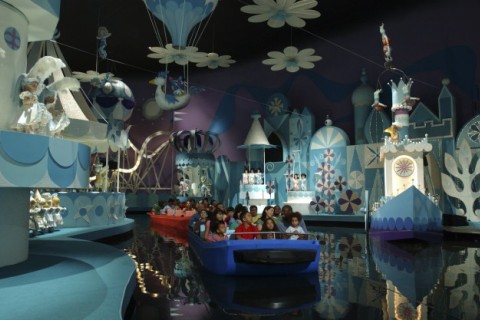 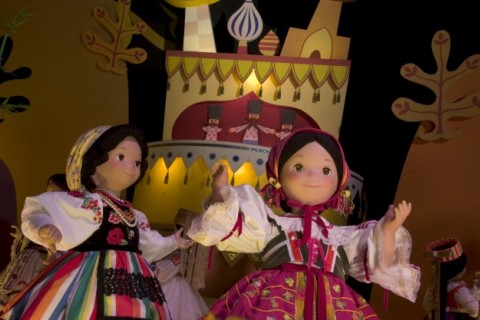 See all photos of It's a Small World

Reviews of It's a Small World

Itself the attraction has an exquisite touch of union, peace and culture.

It is those sophisticated minds who enjoy each and every doll you see while sailing in the pageant. It has been based upon the idea of world union, peace, and friendship. For we're all connected; Walt Disney wanted to highlight that. That's why water from major oceans, chants from all over the face, and building icons are the decór of this cultural attraction.

Lately, many wars have sparked, and the newest edition of pin trading in Walt Disney World include a starter set, and even the icon buildings from the ride. (Including a "2015" pin of Cinderella outside an It's A Small World castle)

It isn't as bad as reviewers insist. It has a great view of the Pinocchio Village Haus Restaurant, friendly cast members, good space to sit, and is an enjoyable ride for rainy days. The only thing I might complain from is the façade and exterior compared to the Disneylands of the continents, the one in the Magic Kingdom from Walt Disney World is a Neuschwanstein style with the great white wall under ceiling.

Regardless, it still gives the sense harmony on the earth, where we're all united, for It's A Small World where we live

Jungle Cruise, Pirates, Haunted Mansion, Country Bear Jamboree, Peter Pan, Dumbo's. All rides that have been around for various years, and while some of the above have the need for a change, update or refurb, none of these compare to the drab, boring and creepiness of It's a Small World (IASW).

This is a slow, painful journey through the nations with the same ridiculously annoying song played throughout but sometimes in different languages. Now for educational (vaguely) and nostalgic reasons, I don't understand how anyone can enjoy this. It has become a pretty famous ride for Disney for some reason, meaning that more people actually queue for this than you'd expect. Most I would say will leave Magic Kingdom with the song firmly etched into their heads and they will hum the tune all the way back to their hotel. That is not a good thing at all! The tune reminds me of a sinister tune from a horror movie. Pretty creepy especially with the dolls in the ride.

It's just boring, irritating, and it's my Nan's favourite ride. Says it all really

It Might Be Old and Classic, but Not Worth the Time

When it comes to Walt Disney World rides and attractions, there are quite a few schools of thought when it comes to whether or not they're worth your time. Some people will ride anything and everything and be happy in doing so, others may try something once or twice and then skip it each time they're there, and others will almost dogmatically defend to the death (so to speak) certain attractions there simply because Walt Disney himself had a hand in them, or they're from the earliest days of Disney World.

For me, I fall in the category (generally) of those who will try something once and determine then whether it was worth my time and if I'll ever try it again. I'm NOT going to come down on an attraction simply because of its age.....for instance, I love the old classic attractions of Peter Pan's Flight and Carousel of Progress (both in the Magic Kingdom).

But in the case of It's a Small World, I have to state that I tried it once (or another time only when DRAGGED onto it) and instantly knew it wasn't worth my time to to again.

Basically, the gist of this 10 1/2 minutes ride is a singing and singing and singing of the same song all over again. The song is admittedly catchy, upbeat, and will stick in your head for some time, but the ride in and of itself is incredibly DULL and SLOW. You're basically on a slow-moving boat ride through very dated decorations and animatronic figures of children and animals representing different nations of the world as they sing "It's a Small World After All" in various languages. Why this attraction is as popular and enduringly so as it is, I'll never quite understand. Some enjoy it for the same reasons that I do not and find it a cute, harmless way to spend a few minutes of their time in Fantasyland.

Fortunately, it's located across from some of the much better ride offerings in Fantasyland, namely Peter Pan's Flight and Mickey's Philharmagic. Another fortunate aspect is that you don't typically have long to wait in line as it's one of those constant-loader attractions, with one boat constantly pulling out with a load of riders and another instantly there to be emptied and reloaded. At the very least.....when that hot Florida sun is bearing down on you and you need to get off your feet for a bit (and you don't happen to be near the Tomorrowland Transit Authority), a ride in the air-conditioned It's a Small World can prove to be a nice break.

IASW, as some refer to it, appears to be aimed at two varying age groups: the very young, or the advanced in years. The middle group really won't find much interest in the repetitive song refrain from one room of animatronic kids and animals to the next.

Personally, I do not recommend this attraction. Just because it's one of the oldest attractions at Walt Disney World's Magic Kingdom doesn't mean it hasn't well out-lived its purpose.....but that's my own opinion. Many feeling still consider it "cute" and enjoy it for nostalgic reasons.