A mine train roller coaster that is based around a mock mountain that dominates Frontierland. Aimed at families, Big Thunder Mountain Railroad's lengthy circuit features 3 lift hills and heavy theming throughout. 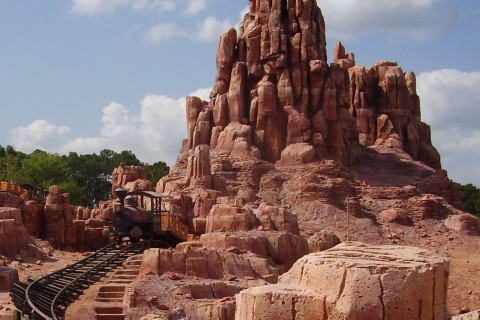 As far as Runaway Mine Train coasters go, this is easily the best one I have ever been on. Longer track, faster, more thrills and drops than any other one I've ever been on. The scenery is great, and it captures the classic ride concept of a Mine Train brilliantly.

I feel bad for giving this a 3/5 Star because it is great, but when I rate rides, I base it on whether I would go on it again over another. So Tower of Terror got 5, Rock n RollerCoaster got 4 and this has to get 3 as a result.

This is the best of it's kind though, but as far as coasters go, there are better out there.

Wildest Ride in All of Frontierland

Where else - other than in Walt Disney World's Magic Kingdom theme park - can a person (within a matter of a few relatively short walks) go from blasting off into space to an under-the-sea ocean adventure to meeting all the U.S presidents in this nation's history? Answer: no where else.

But that's not all. Spread out among the 5 lands comprising this most popular of Disney's theme parks, is Frontierland.......which takes you back to the days of the Old West with such thrilling attractions such as Splash Mountain followed just next-door with the "runaway train" adventure ride Big Thunder Mountain Railroad.

This "runaway train" (as many simply refer to it) ride is based upon an old gold prospecting business back in the days of the Old West. This ride briskly takes you through caverns and mountains and rock slides with plenty of dips and turns to keep you coming back for ride after ride. Interestingly enough, this ride has been in place since 1980 and continues to remain a favorite of park guests as its lines frequently are busy. ** Hint, hint: Get yourself a Fastpass if at all possible, unless you happen to hit it early enough for a short wait.

It's a wonderfully themed attraction (as all are in Disney World) that really puts you right there in the old West. Keep an eye out for the cool details of the little town your train zooms you past and through, including the bathing prospector, the goat on the rooftop, and even the ribcage of a dinosaur skeleton.

The ride itself is about 3.5 minutes long, and reaches maximum speeds of about 25-30 miles an hour. I'd personally like to see it run a little faster than that, but even at its current pace it's enough to keep everyone screaming and happy. There are 6 trains, each with 5 cars. There are two people to a car with a lapbar keeping them in place. The height requirement to ride is 40". If you'd like a tamer ride, try and get as close to the front as possible. Those who like to be whipped around a bit more will want to stick close to the back. Also, for slightly different experiences, try riding it both during the day and later in the dark of night. Sometimes you can manage a ride on it while the night-time fireworks show is going on and that's always fun to watch as you're zooming around on the train.

Big Thunder Mountain Railroad is one of my staple, "must ride" attractions on each and every Disney World visit. If you've never ridden it before, do yourself the favor and give it a whirl........especially so if you're someone a little unsure and cautious about these types of rides. It really only looks like it's going faster than it actually is, and is on the tamer side of the coasters at Disney World (certainly not in the same league as Rock N Roller Coaster or Expedition Everest).

This is one of my favourite rides at Disney. The runaway train shoots through realistic mountain and mine scenery. The ride lasts quite a long time with 3 climbs followed by twisting descents. Although by no means the fastest roller coaster in the world it goes fast enough to give an exhilarating ride, and seems to be popular with a wide age range. If the queue is more than 30 minutes its worth using Fastpass.