The Twilight Zone Tower of Terror At Disney California Adventure

The Twilight Zone Tower of Terror is a dark ride / drop tower at Disney California Adventure theme park at the Disneyland Resort in Anaheim, California. Like the original at Disney's Hollywood Studios theme park in Florida, The Tower of Terror takes place in the Hollywood Tower Hotel, a historic landmark hotel closed in 1939 after the strange disappearance of five hotel guests and three suite towers after a freak lightning strike.

Guests enter through the hotel's lobby and are ushered into the library, where a short black-and-white television, brought to life by a raging electrical storm, tells the unsettling tale of the hotel's history. Halfway through the video, the lightning flashes in the old video synchronize with the lightning strikes visible through the library's window as guests appear to return to that fateful night. A sliding library book case reveals the entrance to the hotel's dark boiler room, where service elevators wait to carry guests to their "rooms."

Once on board, the elevator performs a series of physical movements that are unexpected of an elevator before ascending to two different floors to view two dark ride scenes. Then, as guests watch the lost elevator disappear once again, they fall in a programmed series of lifts and drops as the freight elevator's lights flicker. Doorways previous meant to open into the hotel's three towers now open to overlook the park, giving guests unprecedented views of Disneyland Park and Disney California Adventure.

The Twilight Zone Tower of Terror at Disney California Adventure is notably different from its sister ride in Florida both in appearance, ride experience, and technical statistics. However, the Californian ride is identical to the Parisian ride (opened in 2007 at Walt Disney Studios, Paris).

A fourth Tower of Terror without the Twilight Zone branding, but with the same mechanical and technical composition can be found at Tokyo DisneySea at the Tokyo Disney Resort. Instead of The Twilight Zone, the ride in Tokyo is themed to an eccentic and villanous millionare who stole ancient artifacts during his world travels and, upon mocking one particular idol before ascending to his penthouse, incurred its wrath. In place of a library and boiler room, Tokyo's Tower of Terror moves guests through the millionaire's office (where a stained glass window tells his story as the idol reawakens) and a vault (where artifacts from Egypt to Mesopotamia to African tribes are displayed in storage). 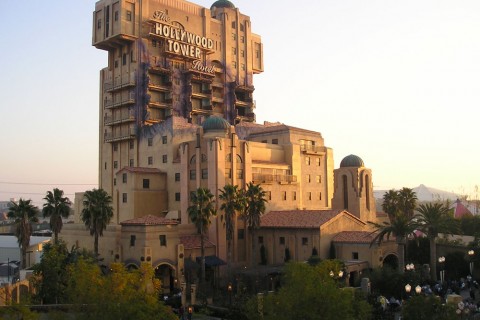 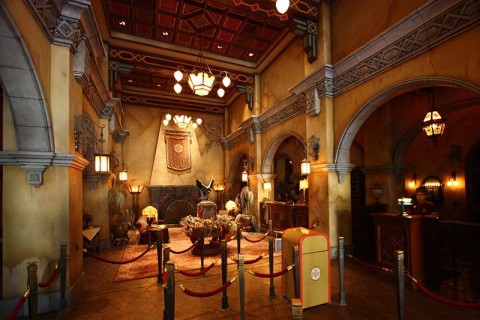 What Goes Up Must Come Down

Ready for a real rush? This is the ride for you. Enter the Hollywood Tower Hotel and prepare to enter the 13th floor, just to be thrown back down. The beauty of this ride is that the drop sequence is random. Meaning no two rides will be exactly the same. If you are a thrill-junkie, this is a ride for you!