Opened as Animal Kingdom's first major coaster and first ride to feature a mythical animal, Expedition Everest is a forwards / backwards mine train coaster in which guests encounter the legendary Yeti through special effects and a stationary animatronic figure. As you wait in line to board the ride you pass through  a Tibetan village at the base of Mount Everest, full of interesting artifacts.  After a steep initial ascent, the mine train shoots through the mountain at high speed, and after a shock encounter you career backwards in the dark.  This is a popular ride and can be busy at peak times, but at the very end of the day you can sometimes walk straight on. 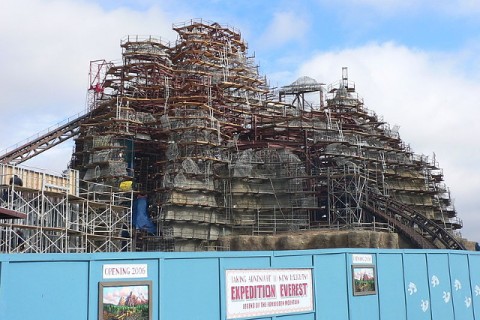 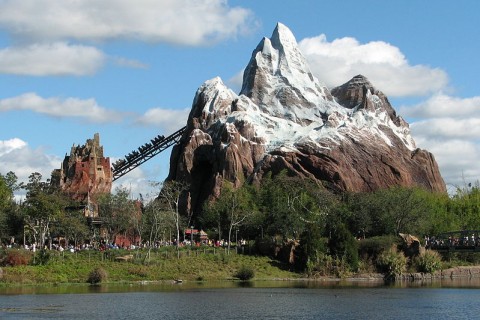 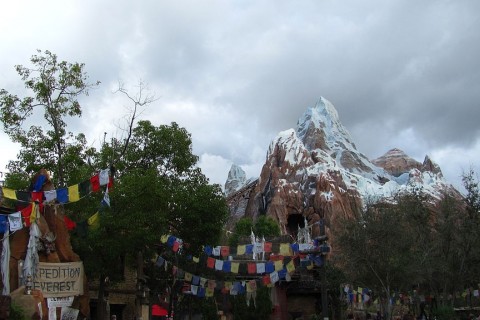 See all photos of Expedition Everest

Expedition Everest - An Animal Kingdom "Must Do"

In its early years, Disney World's Animal Kingdom theme park was best summed up in one word - "lacking". While it has always been a beautifully themed park with a couple of interesting rides and attractions here and there, for the longest time it was missing that one big attraction that would really bring in the crowds......that is, until the opening of Expedition Everest, the thrilling roller coaster experience that takes you to Mount Everest and face to face with the "Abominable Snowman" or Yeti.

Simply put, Expedition Everest is one of THE best attractions in all of the Walt Disney World resort.....it is that great. As is the typical Disney fashion, not only is it a thrilling roller coaster in itself, but it's wrapped in fantastic theming and a very convincing backstory as well.

The story behind the ride is a walk-through of a Himalayan Yeti Museum showcasing various photos, news clippings, and other pieces of evidence that "prove" the terrible Yeti roams the area around Mount Everest. It is full of various cultural artifacts and decoration from Nepal that you pass as you walk through the queue to the loading station. Soon after, your train is on its way on a twisting winding ride on the outside of the mountain, up and down a hill or two before climbing to the peak of the mountain......only to be stopped in your tracks, literally, as the track in front of you is all broken and twisted upwards, obviously by the Yeti. Before you know it, your racing at high speed BACKWARDS through the mountain and in the dark, hearing the screams of the other riders and then you stop. Projected on the rock-face in front of you is the shadowy image of the Yeti himself, roaring his head off and tearing up the track.....and then he's gone. And so are you.......your train quickly moves FORWARD and down an 80 ft drop outside in the bright sunlight, before racing back inside the mountain itself until finally, you see it.....the Yeti! And as you speed by, you can just glimpse his outstretched arm reaching for you......and then......you're back at the station. 2 minutes and 50 seconds from take-off, it's now "ride over" and you get to walk through the after-ride gift shop where you can feel free to purchase a photo of you screaming your head off if you so want.

If you're the type of person who loves roller coasters, you should love Expedition Everest. It's fast, it's in the dark, it goes forward and backwards.....it's just a great ride and a lot of fun. Being one of the most popular rides in all of WDW, it is of course a Fastpass attraction. The line, for the most part, does move along at a good clip, but you may still want to avail yourself of picking up a Fastpass so you can come back at the specified time with little to no wait in line. OR......you can also make use of the "single riders line", an option I like to make use of while I'm there. If you don't mind being separated from those you're in the park with, you can fill in the gap of any empty seats as one train gets filled with riders from the regular line. You can go on ride after ride after ride with minimal wait this way.

One of the cooler aspects of the ride is its height. As you climb the various hills on the outside of the mountain, take a look around you. At its highest part, if you happen to be towards the front of the car, you can see over most of Walt Disney World. You may have to look hard (and quickly), but you can catch a glimpse of Epcot's Spaceship Earth, Hollywood Studios' Tower of Terror, and the spires of Cinderella Castle way over at the Magic Kingdom.

Prior to Expedition Everest coming to Animal Kingdom, I always considered the park a "once-a-trip" kind of park. In other words, there had only been enough there to see and do to merit visiting that park once during my vacation and stick with the other parks the rest of the time. Now that's not the case. I could spend all day going on just this ride over and over again. I'm sure if you've never given it a try, and you go ahead and do it......you'll feel the same way.

Fear the YETI!... If he is working that day!

The title of this review is a bit of an inside joke with any Disney World fanatic as throughout the life of Expedition Everest, the Yeti has been pretty stubborn. Several mechanical issues have occurred, but those could probably be expected for an animatronic as large as he is on the ride.

For the ride experience itself, it is like everything else Disney, themed just right and gives an overall enjoyable journey.

My family always loves taking advantage of the single-rider line to ride this as many times as possible. (Even my mom who is not always "up" for coasters)

The wonderful part about this coaster that allows almost anyone the chance to really enjoy the ride is how smooth the ride transitions from one moment to the next. Fast drops mixed with banking turns, the coaster takes you up, down and through the mountain while enjoying the care and precision that imagineers place into Disney rides/attractions.