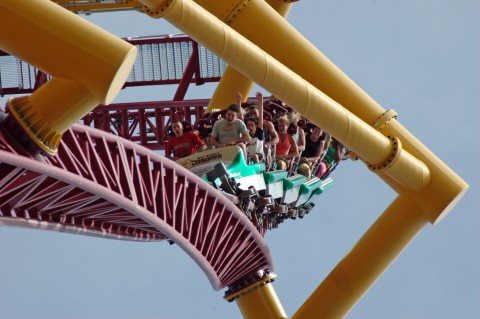 While we are excited about all the new attractions and coasters coming in 2023, sadly there are a few that gave their last rides this past year.

Whether they closed for good or will return in newly imagined ways, here are the attractions that we bid farewell to in 2022.

We called for the Rocky Mountain Construction treatment for this coaster back in June of 2022. Fortunately, the news that Wildcat would be transformed into a record-breaking hybrid was confirmed when Hersheypark announced Wildcat’s Revenge. We cannot wait to see Wildcat get new life and solidify Hersheypark as a top coaster destination.

Another coaster that is closed, but not quite gone is Top Thrill Dragster at Cedar Point. The coaster closed in August of 2021 following an incident where a woman was severely injured by a piece that had flown from the coaster. It was then announced that the coaster would not be open for the 2022 season.

However, news later came that Top Thrill Dragster “as we know it” would be officially retired. Cedar Point has not released further details on what “as we know it” means or what is to come for this strata coaster. We are certainly excited to see the progress being made on the reimagining of this iconic coaster and will keep you updated on this during 2023.

Shrek 4D at Universal Studios Orlando closed in January after operating for nearly twenty years. The attraction was a 4D motion simulator themed around Shrek, Donkey, Fiona, and many other characters from the Shrek movies. It was recently announced that the attraction would be replaced by Illumination's Villain-Con Minion Blast.

The new attraction will be very different as guests will not board any ride vehicles and will be moved along the attraction on moving walkways while they compete for a spot on the villain group, the Vicious 6. This new attraction is slated to open in the summer of 2023.

Several attractions at Carowinds closed in August to make way for their new themed land, Aeronautica Landing. YoYo, a classic swing attraction, and Southern Star, a swinging ship attraction both permanently closed. The Action Theater, which most recently had become Plants Vs. Zombies Garden Warfare: 3Z Arena in 2016 also closed permanently. The motion theater attraction originally opened in 1993 and had a myriad of different themed simulations over the years.

Finally, Dodgem, the classic bumper cars attraction also closed. However, it will reopen as the reimagined bumper car attraction Hover and Dodge in 2023.

Following the death of 14-year-old, Tyre Sampson who tragically fell from the attraction, Orlando Free Fall was closed in March. Findings from an investigation into the cause of the incident indicated that sensors had been improperly modified leading to the harness not closing correctly.

Orlando Slingshot LLC, which owns the attraction has yet to take responsibility for any wrongdoing and is currently fighting allegations of misconduct from the Florida Department of Agriculture & Consumer Services regarding the sensor adjustments that were made and improper training procedures. Despite the ongoing conflict, ICON Park announced that the attraction would not reopen.