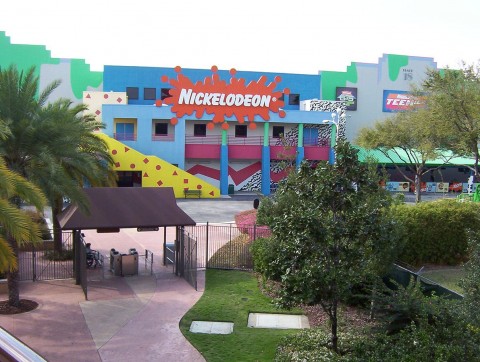 In 1988, Nickelodeon, the popular network TV channel aimed toward children of all ages, collaborated with Universal Studios in Orlando to begin development of a working production facility on location.

The facility would use approximately 90,000 square feet of soundstages 17, 18, and 19 on Universal property, and was built with the perspective of children in mind. Creative executives and workers would regularly crawl about on their knees in order to determine what the project would look like from a child’s eyes. The facility completed construction the following year and branded itself as the “World’s First Headquarters for Kids”.

After its opening on June 7, 1990, Nickelodeon Studios enjoyed years of popularity thanks to its frequent filming of sitcoms and game shows that regularly encouraged audience participation. Many popular TV shows were recorded on location during Nickelodeon’s presence in the park such as Kenan & Kel, Clarissa Explains it All, Figure it Out, and even the 1999 and 2000 Kids’ Choice Awards.

Nickelodeon Studios also featured a forty-minute studio tour that led guests through the facility to learn about the process of developing and filming new shows, costuming and makeup, and even a demonstration of how Nickelodeon’s iconic green slime (also known as “gak”) is produced within the Gak Kitchen. Nickelodeon saw an estimated four million visitors through the tour in its first year of operation.

Outside, the Nickelodeon Slime Geyser was the first to greet visitors by spouting buckets of green-colored water every ten minutes. The outside area of the studio would also become home of the Nickelodeon Time Capsule which was buried on location in April of 1992. Many items deemed important to kids were placed inside the capsule such as a barbie doll, a box of twinkies, comic books, and VHS tapes of Back to the Future and Home Alone. The capsule is set to be opened on April 30, 2042.

Over the following years, Nickelodeon Studios saw a decline in production as executives began the transition from live action game shows and sitcoms to animation following the success of shows such as Ren and Stimpy and Rugrats. With time, most of the filming began to take place in California rather than Florida. Additionally, attendance at Nickelodeon Studios was beginning to dwindle as Universal upped its game with new attractions within the rest of the park. Around this time, Nickelodeon Studios shortened the studio tour from forty minutes to ten, and skipped over many of the important points of the production process.

Finally, on April 20, 2005, Nickelodeon Studios shared its last day in Universal before closing its doors permanently the next day. Most of Nickelodeon’s remnants were removed from the exterior, including the time capsule which was reburied at the nearby Nick Hotel until it's closure in 2016. It was then moved to Nickelodeon’s animation studio in Burbank, California, where it remains to this day.

Today, the exterior of the former Nickelodeon Studios has been painted over to match the color scheme of the nearby Blue Man Group attraction that took up residence in the soundstages formerly occupied by Nickelodeon. Although the interior has been off limits to guests, some urban explorers have found their way inside the building to search for other remnants of Nickelodeon, and as of 2022, very few of these remain intact. The only indications that the “World’s First Headquarters for Kids” once occupied the space are some themed signage and a green-tiled bathroom floor.

Following the recent closure of the Blue Man Group attraction, nostalgic fans are hoping for a revival of Nickelodeon Studios. Though unlikely, it is not entirely out of the question that Universal would choose to reintroduce some aspect of Nickelodeon, whether it be a museum dedicated to Nickelodeon memorabilia throughout the years or some kind of newer, updated version of what once stood. Regardless of what now occupies the space, Nickelodeon Studios will remain alive in the memories of children who grew up watching and visiting.

I wish that Universal Orlando would add a wider variety of Nickelodeon attractions than are currently there, and hopefully the building does become Nick themed again!