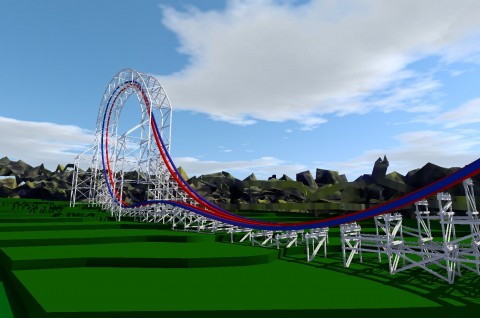 In an increasingly crowded amusement park market, Fun Spot parks continue to surprise crowds and exceed expectations. Though these are smaller parks with minimal theming, Fun Spot parks prove they have their finger on the pulse of the industry with every new addition, a fact even more evident in their latest purchase. The park chain’s less talked-about park, Fun Spot America Atlanta, recently announced the addition of their new-for-2022 coaster, an original, ground-up, Rocky Mountain Construction creation.

This addition is Fun Spot’s largest purchase to date, and though it looks to be a killer ride, the coaster itself acts as a curious and exciting indicator of what may be to come for Fun Spot parks.

Fun Spot quickly followed their announcement of this brand-new RMC with some concept images of the coaster itself. The two-toned track resembles that of The Joker over at Six Flags Discovery Kingdom, only this track is blue and red, with stunning white supports. Of course, the color scheme of the ride may change once theming is taken into account, especially as Fun Spot pursues the possibilities of branding with an Atlanta sports team.

RMC Ibox coasters such as these come in two main varieties: refurbishes and ground-up layouts. Refurbishment is sort of the MO for RMC, as they first proved their skills at using old supports to craft new rides at Six Flags Over Texas in 2011, though their ground-up creations have gained popularity in the past few years. If you’re new to RMC, the vast majority of these coasters are hybrids, meaning they feature steel track with a wooden support structure, maintaining the charm and feel of a woody while offering a smooth ride with more intense elements wooden track would not be capable of.

The images released feature a dive loop turnaround, which may be one of many inversions if this RMC is anything like its counterparts, one of which being Twisted Cyclone, a coaster right down the road at Six Flags Over Georgia.

Though I (along with the rest of the coaster community) am incredibly eager for this addition, it’s not hard to admit that this came as a shock. Having two RMCs in one city just doesn’t happen. There are two states—California and Texas—before Georgia to have more than one RMC, but these are massive states, and the RMCs are found on opposite ends. Six Flags Fiesta Texas does feature two RMCs in one park, but they are completely different models, one an Ibox refurbishment and the other a Raptor model. To have two RMC Ibox coasters in the Atlanta area is as absurd as it is enthralling.

Oftentimes in the amusement industry you’ll find manufacturers creating relationships with parks. Sea World Orlando, for example, has strong ties with Bolliger and Mabillard, while Disney often works with Vekoma. When a park purchases a coaster from a manufacturer, it is more than a one-time business transaction. The purchasing of a ride signals a process of press, building, and teamwork which can exceed a year. By the time a ride opens, there is always a relationship between the manufacturer and park—whether positive or negative.

So what does this mean for the future of Fun Spot? Can we expect Fun Spot to continue to work with Rocky Mountain Construction in the future? Short answer: hopefully!

The Rocky Mountain Construction purchase did come as a surprise to some, as Fun Spot has a history working with manufacturer Great Coasters International in their Orlando coaster White Lightning. Then, at IAAPA 2019, GCI announced their brand-new steel track which is very reminiscent of RMC’s track. Where did GCI unveil a sample portion of this track? At none other than Fun Spot Orlando. This steel track was then implemented on White Lightning, reinforcing a stretch of track which had worn over the years.

The assumption could be made that Fun Spot has a solid relationship with GCI, so it is a bit puzzling that the park went with an RMC rather than GCI’s brand-new hybrid model. The best case scenario here would be that Fun Spot maintains a relationship with both stellar manufacturers, because when it comes to hybrid coasters, you really can’t have too much of a good thing. Perhaps Fun Spot plans to utilize RMC and GCI in its future endeavors.

The Future of Fun Spot

With such a large purchase for Fun Spot America Atlanta, one must wonder what is next for this small park chain. A new RMC will absolutely draw crowds out to their Atlanta park, and more revenue means more growth. Could we see an addition to the Orlando or Kissimmee locations soon? Will Orlando be gaining its first RMC in the near future? (And if it does, will it open before Iron Gwazi?)

If you’re an avid coaster lover, take this single piece of advice: Keep your eye on Fun Spot.

You neglected to mention that Fun Spot used Gravity Group/Gravitykraft to build Mine Blower at their Kissimmee park in 2017, several years after White Lightning opened. So I don't know if you can read too much into their supplier relationships based on these choices.

GCI uses their ride at Fun Spot Orlando as a demonstration model during the annual IAAPA Expo so installing their new track system was not a surprise at all.

But given their supplier choices at their Florida parks, the fact that they went with RMC in Atlanta did not surprise me. What did surprise me was the I-box track, I figured they would go with topper track. Looks like a heck of a lot of fun in any case.