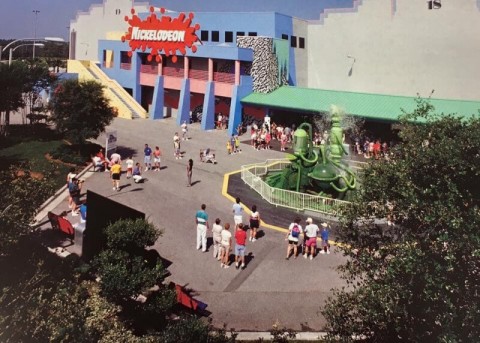 “In 1979, nobody thought the network would survive,” said Nickelodeon executive vice president and general manager Geraldine Laybourne in a December 1988 interview with the Orlando Sentinel.  “Kids were reluctant to admit that they watched Nickelodeon because they thought their friends would make fun of them.”

Almost a decade later, “The First Kids’ Network” was a phenomenon or very close to it.

By 1984, the company was losing $10 million annually just to come in last for cable viewership in the United States. The following year it turned a profit. Within four, it was carried by 76% of the country’s cable providers.

The secret sauce wasn’t slime or even gak - it was Laybourne.

She started at the network in 1980 as a program manager. At the time, its line-up was a food pyramid with no capstone - all greens and grains, with no sugar to help it go down. Besides You Can’t Do That on Television, Nickelodeon’s first big winner, a day in front of the TV felt an awful lot like school. There was an obvious disconnect between the producers and the viewers, best exemplified by Going Great, a show about amazingly talented kids that just reminded kids at home how amazingly they weren’t.

To figure out what children did want to see, Laybourne asked them. “We were selling them the same things broadcasters have traditionally sold them and they were saying, ‘You don’t know what you’re talking about.’” The resulting focus groups would become the network’s North Star, keeping the schedule fresh and giving adolescent fans a sense of ownership. It wasn’t broadcast at them, but for and by them.

Under her leadership, Nickelodeon introduced staple programming blocks like Nick at Nite and Nick Jr. In October 1986, the network found its first in-house hit with a scrappy little game show shot in a Philadelphia PBS station. Double Dare cost only $10,000 an episode. Almost immediately, it tripled Nickelodeon’s ratings.

In early 1988, a meeting was called to handle this unprecedented success. Nickelodeon was a household name. Soon it would corner 20% of children’s viewership, beating all of the big three - ABC, NBC, and CBS - combined. But TV was still just the first step. Nickelodeon could be a lot more than just a channel. It could be a film studio. It could be an animation house. It could be a lifestyle brand.

And it could be a living, breathing place.

A month before Laybourne reminded the Sentinel how far the network had come, Nickelodeon found a home, and it just so happened to fall within the delivery area.

It already had the Woody Woodpecker characters on staff and Hanna-Barbera’s on loan, but they were evergreen. Guests of all ages would recognize, hug, and purchase furry, little clones of them. That was as intended. How many of those guests, though, planned their entire vacations around going to see George Jetson? Not as many as did for Mickey Mouse. The Disney stable was evergreen, too, but famous in a way usually reserved for soda pops and fast food franchises.

Laybourne responded in kind: “We could have a beautiful relationship.”

On April 17th, 1989, production of Super Sloppy Double Dare, the second iteration of the show’s first spin-off, moved from the WHYY-TV studio in Philadelphia to Stage 21 at Universal Studios Florida. It filmed for three weeks as the park was under construction. Although the network’s dedicated facilities hadn’t even broken ground yet, this would be the first Nickelodeon program made on the property.

That groundbreaking followed almost immediately after wrap, on May 2nd. In a little under a year, the Nickelodeon splat would stand proud atop a production facility flanked by 16,500 square-foot soundstages. Planning began in earnest on how to fill that future real estate.

The June 7th, 1990 grand opening of Universal Studios Florida was an unmitigated disaster for just about everybody but Nickelodeon fans.

They didn’t even have to get on a plane to join in the fun.

Kids at home could tune in to the all-out, three-hour Nickelodeon Studios Opening Day Celebration broadcast live from the brand-new digs. It had all the pomp and circumstance that “The First World Kids’ Headquarters” deserved. Celebrity guests ranged from Linda Blair to TV’s Superboy. The cast of Don’t Just Sit There hosted spotlights for each of Universal’s marquee attractions. Crowds went wild for performances by artists like Kid ‘n Play, The Cover Girls, and Perfect Gentlemen. There’s even a rare glimpse of the Nick Express, an ordinary Amtrak tricked out with Nintendo Entertainment Systems and Marc Summers, that one lucky winner rode all the way to Florida.

The Universal-Nickelodeon pact was sealed in the traditional way. Steven Spielberg came prepared in a hard hat and poncho. Summers set him up with a simple question.

The executive creative consultant of Universal Studios Florida, the director of Jaws and E.T., was slimed.

Marc Summers wrapped the special by inviting kids the world over to see it for themselves. If they hurried, they might just get to watch Family Double Dare, Make the Grade, and Eureka’s Castle happen. The famous Slime Geyser, hinted at but not shown in the special, would officially erupt four months later, on October 27th.

Nickelodeon shows ended with that famous silver globe. Universal commercials showed kids stampeding toward that famous blue building. The studios were suddenly inseparable. To quote a print ad from the era: “There’s only one place to get slimed, gakked, and double dared.”

Minute for minute, the Nickelodeon Studios Tour took up as much home video footage as any of Universal’s heavyweights. It was, is, and may remain the closest real-world analogue to the Wonka Factory. Fans didn’t just get to see how the gak was made. If they were lucky and loud enough, they might also get to bounce their way through the foam-rubber machinery and crash in a kiddie pool of it. It was all real and all right in front of them, or at least behind glass. In the essential documentary, The Orange Years, Marc Summers does admit to dismantling some of the backstage microphones just for a little privacy.

The Tour began an escalator ride to the second floor, offering an early glimpse of the Game Lab. But before kids could burn off their excitement, a little more winding was in order. TV monitors introduced the network to unwary visitors and hyped everybody else. Long windows looked down into the soundstages often occupied by the latest Nick competitions. After that, the production process of television was broken down into its component parts and put on display, one room at a time. If anyone got antsy peering into the Graphics Department, there were livelier exhibits like the Nick at Nite Museum and the beloved Gak Kitchen. Wrapping the building and descending back down, visitors could finally sit down in the Game Lab, where new activities were put to the test and new contestants were scouted daily. Befitting the company philosophy, electronic surveys were readily available.

In the park’s early, temperamental years, Nickelodeon was a blessed absolute - slime never had technical difficulties. As the Hollywood East plan fizzled, the studio was an absolute blessing - cameras were always rolling at Nickelodeon.

In the summer of 1991, those cameras rolled on a milestone. The Nick at Nite sitcom Hi Honey, I’m Home became the first prime-time network series produced in Orlando and the first produced by a cable network to appear on any of the Big Three. Though syndicated programming would remain the standard, it was a win for both Nick and Universal.

With the theme park bump and the continued success of its game show roster, the network took a profound step forward. For the first time ever, Nickelodeon would produce its own cartoons.

The “Nicktoons” block debuted on August 11th, 1991, with Doug, Rugrats, and Ren & Stimpy. All three hit. Not long after, Ren & Stimpy became the most watched show on cable. It was hot enough for Universal to draft some live shows for the park, including one that would’ve invaded the post-production area of the Tour, but ultimately the powers that be were scared off by the same hyper-scatological sense of humor that made the characters famous.

With animation duties handled at by Nick’s Games Animation studio in Los Angeles, Universal would have to settle for the white-hot merchandise and short-lived walk-around characters. The rotating series of dioramas out front, each a photo-op for another Nickelodeon show, didn’t hurt either.

This runaway popularity earned the studio a re-dedication of sorts.

On April 30th, 1992, Get the Picture host Mike O’Malley and Clarissa Explains It All co-star Joey Lawrence presided over the burial of a Nick time capsule. The “Kids World Council” voted on the ultimate contents, which included a Back to the Future VHS tape, a Barbie doll, a piece of the Berlin Wall, and a camcorder containing a tape of the day’s events. It was all loaded into a big, orange cylinder and put into the ground beside the Slime Geyser, to be opened again on April 30th, 2042.

As the game shows got Gutsier, the most ambitious needing the extra headroom of Stage 21, Nick went looking for its next big thing. The network showed it off on April 16th, 1994 - All That had arrived and with it, the beginning of the end.

By 1995, Nickelodeon reached two out of every three American homes and accounted for 40% of the entire children’s viewing audience. That same year, Nickelodeon Guts and its Global spin-off ended. Legends of the Hidden Temple only had one more season in it. Double Dare, the underdog that turned the network into must-see TV, was already two-years cancelled.