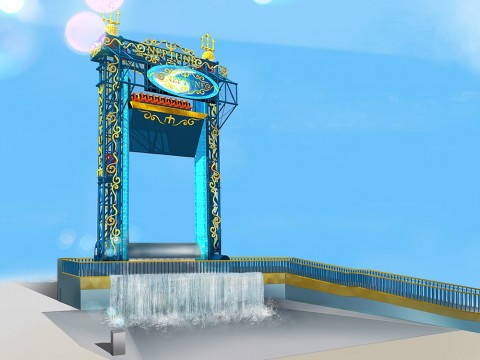 Modern Italian ride manufacturer Zampera is perhaps one of the most prolific ride creators in the world – even if you don't recognize their name. Zamperla's portfolio is stocked with over 350 coaster installations (ranging from no less than a hundred kiddie-sized Dragon coasters to larger "Volaire" flying coasters and launched thrills) as well as dozens of well-known flat ride models (like the spinning Disk-O quasi-coaster, the revolving and swinging Discovery pendulum ride, the inverting Air Race, and a line of dozens of family flat rides). If you've been to any amusement park, chances are you've seen a Zamperla ride in action.

But the place to find this company's marquee attractions is Luna Park – one of the amusement park within Brooklyn, New York's historic and world famous Coney Island boardwalk zone. Luna Park isn't just stocked with Zamperla classics like the Soarin' Eagle flying coaster, the iconic Thunderbolt, and the Steeplechase moto-coaster)... it's the company's test bed for new rides... and their newest is a doozy. Announced in 2019, the Big Wavez merges the thrills of a drop ride with the interactivity of a shooting gallery; the awe of a visual centerpiece with the splashdown of a shoot-the-chutes.

As the ride begins, 20 passengers strap into a platform bobbing in a lagoon or waterway. As the platform is hoisted up to the ride's height (in the default model, about 50 feet high), water pours out of its base, creating a beautiful, cascading water feature for onlookers. At the tower's peak, riders find themselves positioned behind an LED screen where custom animation (for example, a digital Poseidon) involves riders in real-time gameplay. Tracked by precision cameras and in-seat sensors, guests become pawns in a hidden interactive game. Imagine a round of "Simon Says," where those who disobey the god risk Neptune's wrath. Determined by the actual performance of guests', the ride's program can branch. Guests may be sprayed with hidden fountains, yo-yo, or launch upward unexpectedly.

At the ride's conclusion, the ride platform freefalls, plunging back to the pool below and digging its wedge-shaped base back into the water. The result is a massive, iconic tidal wave. The picturesque, 33 foot high burst of water is certain to soak onlookers... but guests' performance in the game is what determines if they'll be soaked, too, as the ride auto-adjusts splash guards to either protect riders or subject them to Poseidon's fury. See the ride's prototype in full force in the video below:

The first ever Big Wavez was announced as part of a multi-year expansion to Coney Island's Luna Park, set to debut in 2020. Naturally, the COVID-19 pandemic saw the expansion postponed, and Zamperla's been tight-lipped about what may or may not survive. So the question must be: would you tackle this new, prototype drop tower? Or better yet, would you be happy to hear that one was coming to your nearest Cedar Fair, Six Flags, or SeaWorld Park?