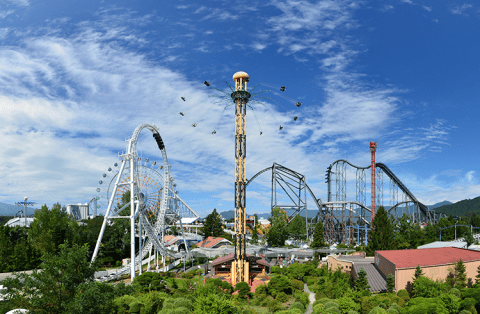 Nestled at the base of Mount Fuji in Yamanashi, Japan is a park as eclectic as it is innovative, a haven for theme park lovers and world travelers alike: Fuji-Q Highland. It’s a something-for-everyone kind of spot that still pulls off the act of being wholly itself. It’s a smaller park, so small that charm may be a word assigned to Fuji-Q, but I think that word undersells its grandness. Because this small park packs a punch. Boasting a “Big 4” roller coaster lineup and an array of non-coaster attractions (including two year-round haunted attractions), Fuji-Q Highland uses every acre of its land to produce a one-of-a-kind, immersive guest experience.

In my months spent social distancing in Florida, dreaming of going back out to parks again, I developed this running list of places I just had to make it out to as soon as I could. Some are American parks, like Six Flags Magic Mountain and Silver Dollar City. Many were European and many were chains (see: Europa Park and Universal Studios Japan, respectively). But the first park that came to my mind, the one I daydreamed away at from my couch, was Fuji-Q Highland.

So why is this a Bucket List Park? More than that, why is this my number one Bucket List Park? And why should it be yours, too? The first (and most obvious) reason is the ride lineup. That “Big 4” I referred to earlier is no joke. Any one of these rides could be your next favorite coaster.