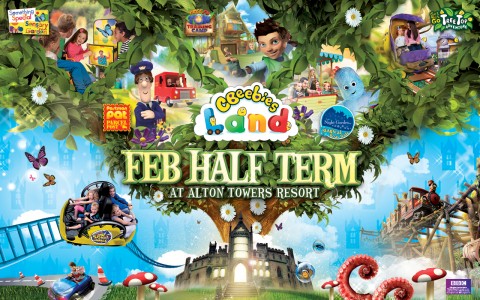 2015 is here, and with it the ever closer start of another wonderful theme park year. Even though the turnstiles for our beloved British theme parks won’t open until March, there has been (and will be) plenty going on throughout winter, with several special events to keep us entertained right up until the spring.

Not much to report from the Island Like No Other over the closed winter season, unlike the surprising bombshell of their “new for 2014” Angry Birds Land this time last year.

Eager Thorpe Park fans amongst us will of course be excited for February, as Thorpe Park opens its gates for special events over the February Half Term period, for the first time since 2009. Meanwhile, other Merlin theme parks – Chessington World of Adventures and Alton Towers, have enjoyed a variety of off-season park events; mostly due to their on-site hotels being available all year round.

Selected rides will be available, which are mentioned on the website to include The Swarm, Stealth, and attractions in Angry Birds Land – great news for those of us who will now get our big coaster thrills at Thorpe Park a month earlier than expected.

Tickets are on sale for February Half Term at Thorpe Park right now at an early bird price of £12.50 for a one-day ticket, and £5 for a ticket to accompany a Merlin Standard or Thorpe Park Standard Pass. Premium Passholders just need to pre-book their free-entry online, in what is the same pricing strategy followed for Fright Nights.

Brainiac Live! and Thorpe Park’s other February attractions will be open from February 14-22, from 10am until 4pm each day. 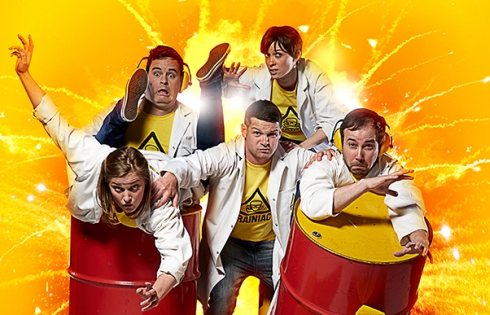 Enthusiasts following rumours about the brand new dark ride due to open at Thorpe Park in 2016 will hopefully have a chance to steal an earlier-than-usual glimpse into its development over the winter season during the February Half Term openings. The new dark ride will be located where The Arena used to be, and is excitingly rumoured to be Merlin’s biggest ever investment in a single theme park attraction. Very little is known about this new ride, with only the plans submitted for planning permission back in October 2014 to really go on. With a spring 2016 opening, it’s safe for us to assume more will be revealed about this mystery ride later on in 2015.

Thorpe Park will officially open its gates for the 2015 season on Thursday, March 12.

Those of you wanting to seize the opportunity and do one of Thorpe Park’s VIP Experiences that debuted in 2014 but you forgot, were too busy strapping into other rides, or couldn’t pick which coaster to climb, can do so in 2015, as the VIP Coaster Climb and Backstage Tour experiences will be returning for next year. Tickets could be snapped up in the Christmas sale with up to 50% off their normal prices – making for a wonderful New Year’s Resolution of climbing The Swarm’s lift hill, or maybe going backstage at Stealth. Even at full price, it is an experience like no other for a dedicated coaster enthusiast.

Finally, Thorpe Park has advised that its extremely popular Ministry of Sound Ride and Club Night events will be returning to the Resort in 2015 . Dates have yet to be confirmed, but it looks likely they will be shortly.

February Half Term will see Alton Towers’ gates opening once again for another mid-February week of fun. This time however, the much loved Moshi Monsters that drew guests through the turnstiles in 2013 and 2014 won’t be returning, and the CBeebies characters will take over the park instead.

Selected rides, as always, will be open, which include Nemesis, Air and the Blade, for those of us looking for a thrilling (yet chilly) day. As in February 2014, The Smiler will remain closed until the 2015 season officially kicks off at Alton Towers in March – despite having a much better year in 2014 than its debut season in 2013, when it became infamous for having technical issues and breakdowns lasting all season long. It’s possible that, in order to keep with the family-oriented theme of the February Half Term events, Alton Towers will not feel it suitable to simply open as many big rollercoasters as it can - even though The Smiler is the most popular ride the park has to offer.

Unlike Thorpe Park, Alton Towers’ February Half Term opening is free for all Annual Passholders (i.e. there is no additional fee for Standard Merlin Annual Passholders, as well as Premium, and of course VIP Passholders).  The general admission ticket costs a little more than at Thorpe Park however, being £17.25 for a 1 Day adult ticket.

Alton Towers’ February Half Term CBeebies Land events will be open from February 14-22, every day from 10am until 4pm.

Usually, Alton Towers opens the Saturday after the Thursday in March Thorpe Park opens, however in 2015, the Towers’ season is confirmed to start on Saturday, March 21.

Throughout December, Alton Towers offered Santa’s Sleepovers, its popular Christmas family short break package. Whilst enjoying a stay at one of Alton’s wonderful on-site hotels, guests could enjoy meeting Santa and his reindeer, tuck into some festive fare, and even wander around CBeebies Land, as this was thoughtfully opened up for younger guests to enjoy.

Chessington boasted a few Christmas and festive events this December, with the return of Zoo Days – its ever popular family weekend, available every Saturday and Sunday throughout winter. Those who want to wrap up and see the animals can do so until March 8.

Chessington’s festive events featured Winter’s Tail - a brand new for Christmas 2014 event, which ran through the December 6 until January 4. Families could soak up the Christmas atmosphere at a festive market, or enjoy a live show, featuring the Gruffalo – a much loved children’s character. Little ones could meet Santa and his reindeer.

Merlin, the largest theme park operator in the UK, launched its yearly Annual Pass sale in December. This caused a slight outrage on the Internet over prices, as fans scrambling to take advantage of the sale prices were to discover price increases for all Pass options.

In addition to all increases, there was no advantage cost-wise to being a previous Passholder than a brand new one, as in the sale it currently costs the same to renew your Merlin pass as it does to buy one outright. Whilst the post-sale 2015 prices for new Standard and Premium options do indeed show a difference in price (£169 for a new Standard pass and £209 for a new Premium pass; a £50 and £60 discount respectively), and renewals will cost less after the sale than new passes, it is usually the case that renewals are cheaper, full stop.

Merlin’s logic behind their decision to have the sale prices the same for new and renewed Passes is most likely a way to encourage more new Passholders in 2015, but has inevitably caused a small outrage amongst existing Passholders, as of course there is no discount to them being past guests, as there normally is.

£119 is the price for a Standard Merlin Pass, either a new pass or renewal, whereas a Premium Merlin Pass will set you back £149, whether you want to renew your old Premium Pass or buy a new one.

Prices are advertised as “the lowest you’ll find them in 2015”, which means we can brace ourselves for another price increase later on in the year, at the rates mentioned above.

The VIP Merlin Pass, a brand new for 2014 and as all-inclusive as they come annual pass phenomenon, will be the third option, though its hefty price tag will mean it is unfortunately out of budget for a lot of us -  as exciting as it sounds.

Last year, the VIP Passes were a hit and sold out rapidly - after those interested put their names down, and a Spring release date was confirmed a few months later. Interestingly, Merlin are advertising the VIP Pass for 2015 as available in June, as opposed to its Spring launch date in 2014. A June date would put this pass as only available from nearly halfway through the 2015 theme park season – not really beneficial for those looking to buy their passes now, and hoping to visit a park earlier in the year. However, those devoted enough to sign up for a VIP pass and wait until June, will be rewarded with a whole host of special and all-inclusive experiences exclusive to the extremely limited number of VIP Passholders they make up - including 12 months’ admission to Merlin attractions worldwide, Priority Parking at their UK theme parks, and a VIP Package which includes Unlimited Fastrack tickets in the parks.

Inclusions are sparser if you own a Standard Merlin Pass; which has always been the case due to the lower price, but it seems like each year more exclusions are added to the list for Merlin’s cheapest Annual Pass. This is particularly noticeable with additional entry fees to special events in their top theme parks, such as Fright Nights or Summer Nights at Thorpe Park.

Do you remember the brand new Shrek experience, Shrek’s Far Far Adventure, Merlin mentioned briefly in February 2014 - which will be debuting in London later in 2015? It is still on track for a summer 2015 opening. Restrictions will apply to Merlin’s Premium Passholders, who are advised to pre-book their tickets in September, and those with Standard passes will simply need to pay for their entry tickets. Needless to say it looks like Merlin are expecting very high demand for their new attraction located in the heart of London at City Hall – amidst a cluster of their other popular London attractions.

Despite the slight price increases on their passes, Merlin Annual Passes still offer the best value for money by far, if you plan on visiting several of their attractions in one year – as many of us do.

After enjoying the festivities in December that our parks offer, we now look forward to January which, even though it remains a quiet month, can be enjoyed in reflection of the theme park excitement 2014 brought, and in anticipation of what lies ahead for us at the very start of 2015.