The Top Water Parks and Amusement Parks in Cyprus 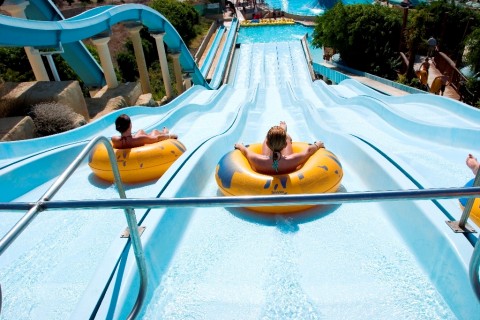 The brilliant sunshine and warm temperatures in Cyprus can lead to an irresistible desire to cool off by immersing yourself in water. Fortunately, an entire industry exists dedicated to this need, and a variety of sprawling water parks are located on the island, hosting lengthy slides, enormous wave pools and relaxing “lazy rivers”.

Although there are no major theme parks inCyprus, smaller amusement parks are also on offer. While a roller coaster will never quite offer the same cooling effect as a water slide, the island’s climate lends itself well to a family day out spent enjoying a variety of thrilling attractions. Here’s a run-down of the best water parks and amusement parks that Cyprus has to offer. 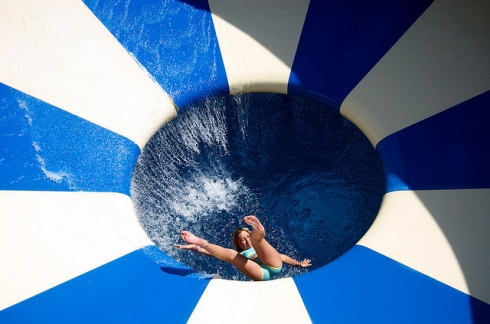 Situated close to Limassol, Fasouri Watermania is one of the largest water parks in Cyprus. It is home to a number of major attractions aimed squarely at thrill seekers, but it also offers a selection of more sedate, relaxing areas for families. The park features a Polynesian theme, andCyprus’ climate helps to add to the overall “tropical” feeling.

Adrenaline junkies are well-served by the line-up at Fasouri Watermania. This includes the impressive Kamikaze Slide, which sees guests hitting speeds of up to 50 km/h as they plummet into the pool below from a height of six storeys. The Black Hole slides are also popular, with riders traversing 120-metre-long courses in complete darkness.

For those after a slightly more relaxing time, the park hosts a long, meandering lazy river and a selection of quieter swimming pools. Guests can also challenge themselves to hang on for as long as possible on its “Wet Wall Climb”, or enjoy the surf in the largest wave pool in Europe.

Don’t miss: The Black Cannons, which see riders become a “human cannon ball” as they are blasted out of the end of a slide by 1000 litres of high-pressure water per minute.

Cyprus’ largest amusement park is located close to Larnaca, and offers a variety of family-friendly rides. Guests can enter the park for free, and are charged on a per-attraction basis. It is also possible to buy wristbands that offer unlimited access to all of the park’s rides.

The majority of Lucky Star Fun Park’s rides are standard fairground attractions, most of which are seen at coastal amusement parks all over the world. This includes a carousel, a safari-themed miniature train, and a relatively tame roller coaster. Two bumper car-style rides are on offer – a standard, ground-based version, and an aquatic version dubbed Bumper Boats.

For very young guests, the Antique Cars ride and bouncy castle are enough to keep them entertained. There is also a selection of restaurants, shops and games arcades to keep you occupied for the rest of your visit. 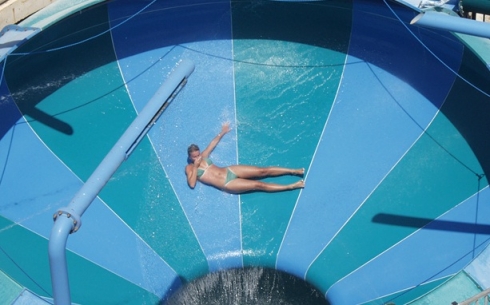 WaterWorld bills itself as “the largest water park in Europe”, and covers some 80,000 square meters. It features an ancient Greek theme, with many of the park’s attractions being named after gods and mythical creatures. Nevertheless, it boasts very modern facilities, including a wide range of dining outlets and bars.

Highlights in WaterWorld’s attraction line-up include The Quest of Heracles (duelling body slides that wrap around a hydra-themed structure) and The Fall of Icarus (which sees riders plunging up-and-down several hills and drops). The Kamikaze Slides –Mount Olympusand Zeus Zenith - live up to their names, with latter offering a near-vertical drop.

Families are also catered for by WaterWorld, with the stunningly-themed Poseidon’s Wave Pool being a particularly impressive sight. The River Odyssey is the park’s take on a lazy river, while the Pegasus Pool offers a water play area populated with a variety of foam toys.

Don’t miss: Drop to Atlantis, a one-of-a-kind water slide that uses audiovisual effects to immerse riders in the experience. 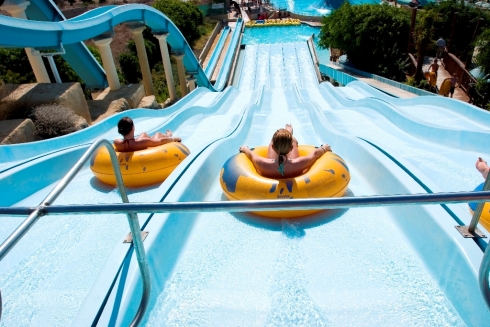 Situated on the Kato-Paphos coastal road, Aphrodite Waterpark offers a large selection of attractions spread across a 35,000 square-metre site. It claims to offer more rides than any other water park in Cyprus, including a selection of thrilling slides and gentler offerings aimed at families and children.

By far the most daunting of Aphrodite Waterpark’s slides is the Free Fall, which stands at a near-vertical angle. The nearby Kamikaze isn’t much better, although it does at least feature some gentler hills along its course. For those with a competitive streak, the Five Lane Racer enables them to take on their friends in a race to the bottom.

The park boasts the largest family rafting ride in Europe, which allows groups of up to 4 people to board a circular raft and traverse a lengthy course. A number of children’s attractions are also on offer, including a pirate ship and a miniature volcano that is surrounded by small slides.

Wherever you stay in Cyprus, you won’t be too far away from a water park or amusement park. Given the temperature outside, it’ll be hard to resist enjoying the rides and slides – pack your waterproof sunscreen, and get ready to have a great time!