Six Flags Over Georgia will add Dare Devil Dive to its growing selection of rollercoasters in 2011. But will the Gerstlauer Euro-Fighter stand out among the park's line-up?

Due to open in time for the 2011 Memorial Day weekend (May 28-30), Dare Devil Dive will be targeted squarely at thrill-seekers. Although it features a relatively low top speed of 52 miles per hour, the inclusion of a vertical lift hill, a "beyond-vertical" drop and a number of other inversions are designed to help the ride live up to its name.

The park has promised that Dare Devil Dive "will be the perfect complement to an already stellar coaster line-up". In this preview, we'll take a look at what guests to Six Flags Over Georgia can expect from the new ride - and whether it can live up to such high expectations. 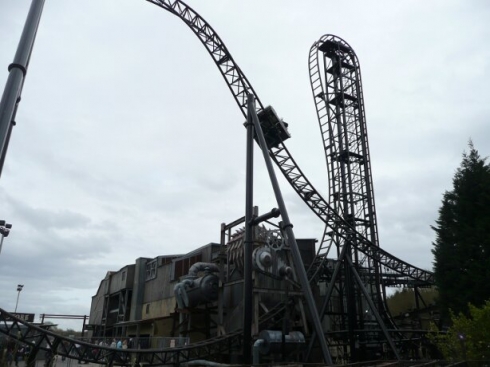 Since its 2003 launch, Gerstlauer's popular Euro-Fighter design has appeared at parks all over the world, including Thorpe Park's Saw - The Ride (pictured above). Dare Devil Dive will become the third Euro-Fighter in the US, with the others being Dollywood's Mystery Mine and SpongeBob SquarePants Rock Bottom Plunge at the Mall of America.

Every installation of the Euro-Fighter to date has included the model's signature "beyond-vertical" drop, with the track angling inwards at greater than 90 degrees. A number of other track elements are also possible, with the coasters' single-car trains able to glide through relatively tight inversions and turns. 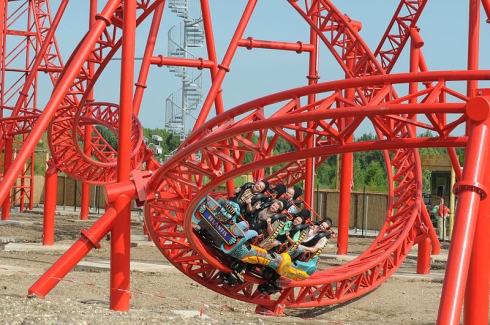 Although most Euro-Fighters see riders seated in cars with two rows of four seats each, the most recent to open (Huracan at Belantis in Leipzig) features cars with six seats arranged in a V-shape. It is not yet known which type of train will be adopted for Dare Devil Dive, although Screamscape suggests that the V-shape is more likely. 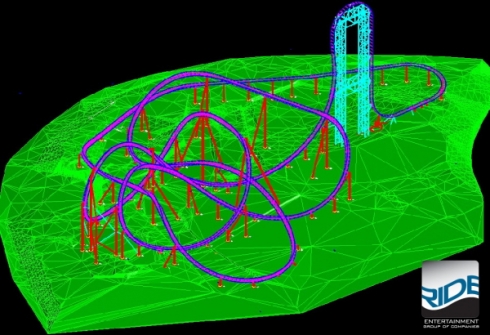 Dare Devil Dive's layout is no secret, with the design (shown above) having been released by the Ride Entertainment Group on its Facebook page. The ride will feature a 95-foot vertical lift hill and a steeper-than-vertical first drop, with riders plummeting towards the ground at 52 miles per hour. They will then go on to traverse three inversions, a heartline roll, a "zero-gravity" hill and an Immelmann loop.

Although rumors had suggested that Dare Devil Dive could incorporate a launched section in addition to the vertical lift hill (as with fellow Euro-Fighter Fluch von Novgorod at Germany's Hansa Park), those hopes have since been dashed. Indeed, although the coaster will feature a custom layout, it is ostensibly very similar to other installations of Gerstlauer's hit design.

Six Flags Over Georgia has already closed off a section of land in preparation for the installation of Dare Devil Dive, which will be placed in the park's USA area. It has indicated that no rides will be removed to make way for the coaster, with the Drive-In Theatre building having been demolished in spring 2010 to make room. 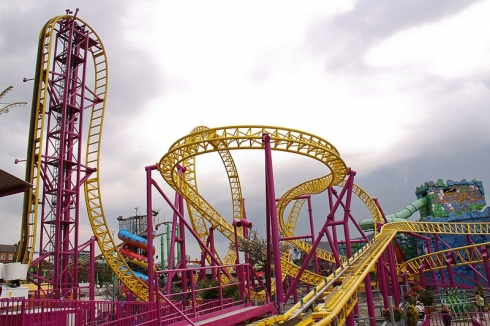 As with most rollercoasters, previous Gerstlauer Euro-Fighter installations have varied significantly in the level and quality of theming applied to them. At this stage, little is known about the theme for Dare Devil Dive beyond the ride's logo and the tagline "calling all daredevils". This suggests that Six Flags will emphasize the adrenaline-rush experience of the beyond-vertical drop, and a new poster reveals that the ride will feature a World War II dogfight-inspired theme.

Many Six Flags Over Georgia fans are excited by the addition of Dare Devil Dive, and we think they're right to be. Gerstlauer Euro-Fighters have not proven universally popular with coaster enthusiasts, but have been a smash-hit with the general theme park-going public. Pitched at the right level between being super-scary and accessible to those only looking for mild thrills, the ride should appeal to a broad cross-section of visitors.

Although some have complained that Euro-Fighters can be a little rough, we haven't encountered any headaches from them so far. And with rumors that Dare Devil Dive could feature a lapbar restraint (as opposed to the classic over-the-shoulder models seen on other Euro-Fighters), the head-banging could be reduced further. 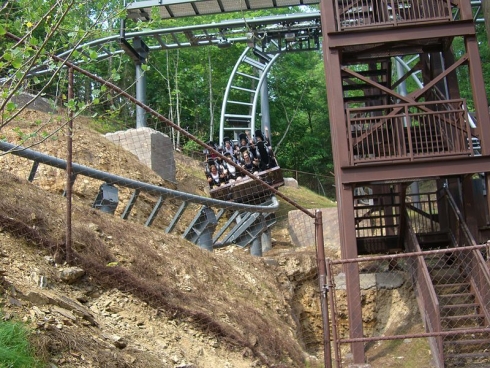 The one thing that does concern us, though, is whether a lightly-themed Euro-Fighter coaster will be able to compare to the popular Mystery Mine at nearby Dollywood. Theming isn't everything, but the indoor section of Mystery Mine (and of Saw - The Ride at Thorpe Park) differentiates it from other, similar coasters and adds hugely to the ride experience. The planned layout for Dare Devil Dive lacks the same level of invention and variety, even if it is made up of essentially the same elements. The World War II theme is fitting for a "dive coaster", though, and we hope it is exploited to its full potential.

Themed or not, Dare Devil Dive will be a welcome addition to Six Flags Over Georgia and further establishes the park as a haven for coaster-lovers. We hope to feature a full review of the ride when it opens next May.