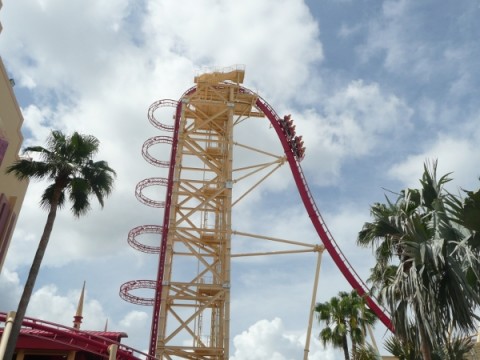 Theme Park Tourist was on hand to ride the Rockit as Universal Studios began a soft opening period for the new rollercoaster. Read on for our first impressions.

After months of waiting, Universal Studios Orlando has finally allowed members of the public onto its newest super-headliner, the Hollywood Rip, Ride, Rockit. At TPT, we were incredibly fortunate to be in Orlando on vacation, and to be tipped off by a kindly team member that the ride was due to open tonight, on August 15. So what did we think of it?

Firstly, we should be clear that it is incredibly difficult for us to be objective in our opinions. We're in Orlando on our honeymoon, and we weren't expecting at all to be part of a major ride opening. We'll try not to let our excitement color our judgement - but we were buzzing before we even set foot on the ride's loading platform.

That said, we'll try and deal with each section of the ride in turn and then wrap up with our overall impressions of the Rockit and how it compares to Florida's other major attractions. 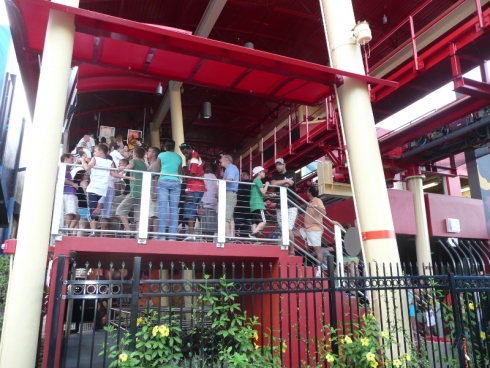 The queuing area for the Rockit is outdoors, but undercover. There is no air conditioning but there are fans in the ceiling. It's a fairly basic up-and-down layout, with steps up to the ride platform at the end, and video screens mounted to the walls instructing guests on how to board the ride and select a song to listen to.

Likely wait times for the Rockit when it is in full service were difficult to judge as the ride was not running at full capacity during the test. Three trains were in use out of a total of five, and the moving walkway that is designed to allow guests to board without ever stopping the trains was not in use. Nevertheless, despite pauses to add new cars the queue seemed to diminish at a reasonable rate.

Universal is making a big deal out of ensuring loose items are not brought onto the Rockit. As with most major rides at Universal parks, items must be placed in free lockers before riding. Guests were constantly reminded of this by Universal staff, and a large section of the video playing in the queuing area is dedicated to ensuring items are stowed away. Glasses are not a problem though, and Natalie was able to ride with them without any issues.

Nick: For such a major ride, the queuing area is a disappointment. Unlike other Universal rides like The Mummy Returns and Men In Black: Alien Attack, which immerse guests in the theme of the ride while they wait, the Rockit's line is minimalist and dull. The pre-ride video focuses more on securing loose items than on building the excitement. Having said that, few will get bored of watching the coaster fly round the final few turns.

Natalie: It was good to see videos of the possible music selections, but overall the queuing area is quite plain looking and a pretty dull place to spend any length of time waiting for a ride. Maybe Universal will spruce it up prior to the official opening - let's hope so, as it currently lags behind rivals such as Rock'n'Rollercoaster at Disney's Hollywood Studios. 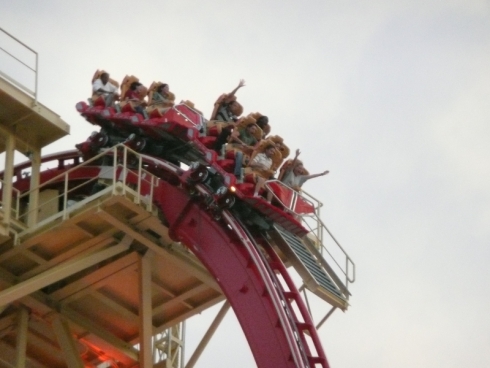 The Rockit's trains can hold up to 12 people. Riders will board using a moving walkway that should boost loading times, but this was not in use during the soft opening. The ride restraints are a first - individual lap bars that wrap around the rider's stomach. Each of these is mounted with an iPod Touch-style music selection device.

Nick: The lap bars are comfortable and definitely preferable to shoulder retraints which as a tall, bony guy often cut right into me. They also give you a level of freedom greater than on other similar coasters - great for those who like to wave their arms around during the ride. The only potential downside is the lack of support for your head - I felt like mine was shaking around a lot during the ride.

Natalie: Getting in the car was easy and the new lap bar restraints seemed to be comfortable and quick to close. But because there is nothing over your shoulders your head does jerk around - I had a headache after riding, although the excitement of the build-up may have contributed to this!

Riders on the Rockit can select a song from five musical genres - Classic Rock/Metal, Pop/Disco, Club/Electronica, Country and Rap/Hip-Hop (you can see the full song selection here). On boarding, riders use a touch-screen mounted to their lap bar to select the genre and song. This plays out during the ride on speakers mounted to the back of their chair.

Nick: The music selection feature is great and a genuine first. I normally like music on rides to be synchronised to the ride pattern, but I have to admit that being able to select a different song every time does add measurably to the overall experience. I'd have preferred the audio to be a little louder, but I was impressed that I couldn't hear Natalie's song at all despite sitting right next to her. A good job, as I much prefer the Beastie Boys to Gloria Gaynor!

Natalie: There's scope to pick a different song every time you ride the Rockit, which is great and really unique. Like Nick, I could only hear my own song but would also have preferred the audio to be a little louder. Maybe this could be made configurable as I know others we spoke to were pleased that it wasn't ear-splittingly loud. 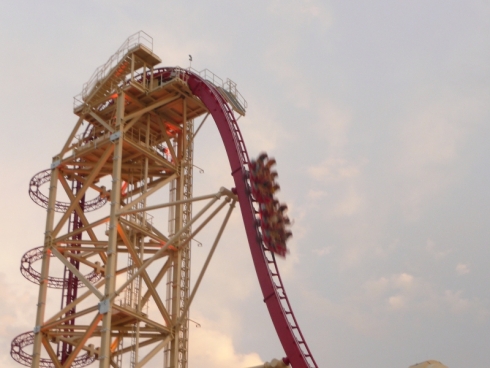 The Rockit's trains travel rapidly up a vertical lift hill. During the evening, lights mounted to loops around the lift hill and on the train itself produce a stunning light show. The trains then plummet down the 167-foot first drop, reaching 65mph.

Nick: The lift is hill is amazing - I've been down vertical drops before but never the other way around. It's also over very quickly - the trains shoot up there very fast. Despite the problems reported with the lift hill and reports that it is very loud, you don't notice it at all over the ride's audio system. The first drop is huge and one of the best on any coaster in the world.

Natalie: The lift hill was incredibly cool but did give me a bit of a headache due to being completely vertical and blood rushing to my head. For me, the first drop was the highlight of the ride and one of the best I've experienced. 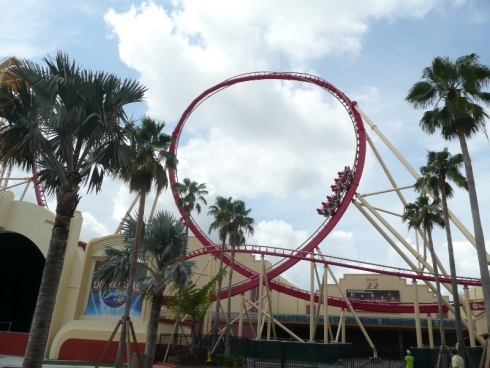 Following the first drop, riders enter a loop with unique feature - the track twists at the top so that the trains are actually right-side-up. They then enter another large drop before bursting through a hole in the side of the Twister queue area. The ride ends with a series of tight turns and hills before entering the final brake run and returning to the station.

Nick: The loop is a genuine selling point for the Rockit. It could be seen as a gimmick, but it gives riders great views over Islands of Adventure and CityWalk. There's not much time to enjoy them though before entering another large drop and zipping around the Twister section. There's also a great twist in the track as you head back towards the loading station.

Natalie: The loop is different and unexpected. The ride was over fairly quickly but seemed just the right length given the intensity of the opening section. 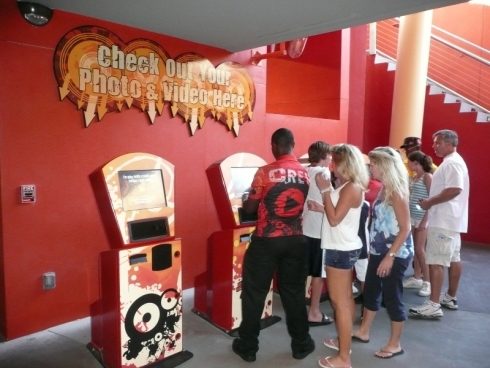 After exiting the Rockit, we were greeted by Universal staff who led us to machines which allowed us to select our ride photo. For $16, we purchased our photo and for a further $5 it was e-mailed to us as a Flash greeting card. Unfortunately, the major post-ride experience for the Rockit - viewing a personalised music video and having the opportunity to buy it on DVD - was not up and running for the soft opening.

Nick: Picking photos was easy and there were lots of staff on hand to help. My only worry would be the number of machines available - given the likely popularity of the Rockit, this could become a bottleneck as many will want to see their video.

Natalie: I was impressed by the number of staff on hand to help with the photos, although it's not clear if this will always be the case. You have to pay extra for a frame for the photo so the cost could add up if you want to get every memento possible - but I look forward to seeing what the videos look like.

Hollywood Rip, Ride, Rockit has its flaws - notably its lacklustre theming and a slightly jerky ride that will shake some folks around a little too much for comfort. But there's no doubt that it represents an astounding engineering achievement for Universal and designers Maurer Söhne. The music selection feature, comfortable lap restraints, stunning first drop and inventive twists and turns ensure that the Rockit stands out as a truly unique experience. Universal should be proud of its new super-headliner, and will doubtless see a boost in attendance now it has finally opened.

The Rockit is perhaps the most stunning new addition to Central Florida's selection of mega-attractions this summer - rival SeaWorld's Manta is certainly a great rollercoaster, but is really an evolution of existing flying coasters elsewhere in the world. Whichever you prefer though, it is a golden year for coaster enthusiasts heading to Florida. The Rockit and Manta will be must-see attractions for years to come.

Have you ridden the Hollywood Rip, Ride, Rockit? What did you think of it? How does it compare to Florida's other attractions? Let us know in the comments section below.

I personally didn't feel that the 4 braking points during the ride were necessary. It made the coaster feel like it had individual segments instead of one fluid ride, which I would have preferred. Otherwise, it is a lot of fun!

For those curious, there is a trick one can do during the song selection period where a "secret" songlist can be used. Holding a finger down on the "Rock-it" logo on the song screen for 10 seconds opens up a number pad on the screen, where a number from 001-999 can be typed in for a secret song.

There are comprehensive lists, even YouTube videos on the secret.

An outstanding share! I've just forwarded this onto
a co-worker who has been doing a little research on this.
And he actually ordered me lunch simply because I discovered it for him...

lol. So let me reword this.... Thanks for the meal!!
But yeah, thanks for spending time to talk about this topic here on your site.